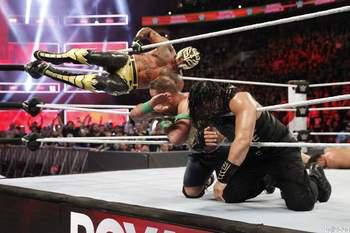 Just days after a stunning Royal Rumble return WWE legend Rey Mysterio will feature on 5 Star Wrestling’s new weekly live TV show.
The British company is visiting 12 arenas with star-studded events to be broadcast live every Thursday night on free-to-air channel FreeSports. The first episode will emanate from the ECHO Arena in Liverpool, where the former WWE Champion will face Merseyside villain Zack Gibson.
More than 8.5 million people have watched the masked icon’s surprise return to WWE on YouTube when he entered the Royal Rumble match at number 27. Mysterio received a huge ovation following a four-year absence and hit a double 619 on Roman Reigns and John Cena before Finn Balor eliminated him.
The high flying pioneer, 43, was a two-time world champion in WWE and previously lit up WCW programming in the 1990s with revolutionary moves.
He posted a picture on Instagram of himself on a plane jetting across the Atlantic just hours after the rumble with the caption: “Get ready UK…we on our way!”
Mysterio will face 26-year-old UK standout Gibson, one of the most hated villains in Europe, who is renowned for technical excellence and blistering promos. Meanwhile, ex-WWE World Heavyweight Champion Jake Hager, aka Jack Swagger, aimed a provocative tweet at his first opponent,‘English Lion’ Eddie Ryan.
He tweeted: “It’s finally here! Flying to @5StarWrestling Liverpool now. But why am I wearing sunglasses inside? Because @RealEnglishLion is ugly as s**t!”
Ryan, who stood up to the Bellator star at a 5 Star Wrestling press conference in Sheffield three weeks ago, was quick to defend himself once again.