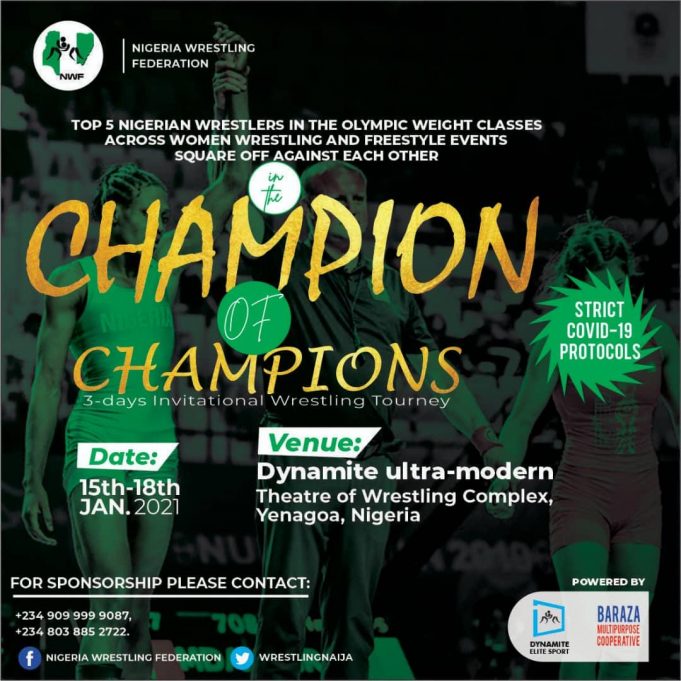 The Bayelsa State capital, Yenagoa is bubbling with excitement and anticipation ahead of the commencement of the maiden Champion of Champions wrestling tournament which begins on Friday, 15th January, 2021.

No fewer than 57 wrestlers across the country drawn from the Olympic weight classes, as well as their coaches and officials, are expected in Yenagoa to jostle for podium places at the ultra-modern Dynamite Theatre of Wrestling complex for three days of solid competition.

According to a statement signed by the Technical Director of the Nigeria Wrestling Federation (NWF) Damian Ohaike, arrival of wrestlers, coaches and technical officials is slated for Friday, with a technical meeting/clinic also billed for same day by 6pm.

After undergoing the compulsory medical examination and weigh-in, action will get underway in the tournament on Saturday in the WW 50kg & 57kg, where the likes of multiple African champions Mercy Genesis and Odunayo Adekuoroye are expected to dominate proceedings.

Action will also be witnessed in the FS 57kg & 74kg classes also on the first day of competition, where 4-time African champion Emmanuel Ogbonna (74kg) is expected to shine like a million stars.

10-time African Champion and reigning Commonwealth gold medalist Blessing Oborududu is expected to light up Day 2 of competition on Sunday, when she takes to the mat in the 68kg class.

Aminat Adeniyi, a Commonwealth champion herself, should also make light work of her opponents in the 62kg class also on Sunday.

The statement added that competition will be concluded on Monday with further action in the Women Wrestling and the Freestyle events.

Varying cash prizes and medals will be awarded to wrestlers who will eventually make it to the podium.

The Champion of Champions tournament, which is sponsored by the president of the NWF Hon. Daniel Igali, is aimed at getting Nigeria’s elite wrestlers ready for the African Championships and the Africa/Oceania Olympic qualifiers both in El Jadida, Morocco in early April.