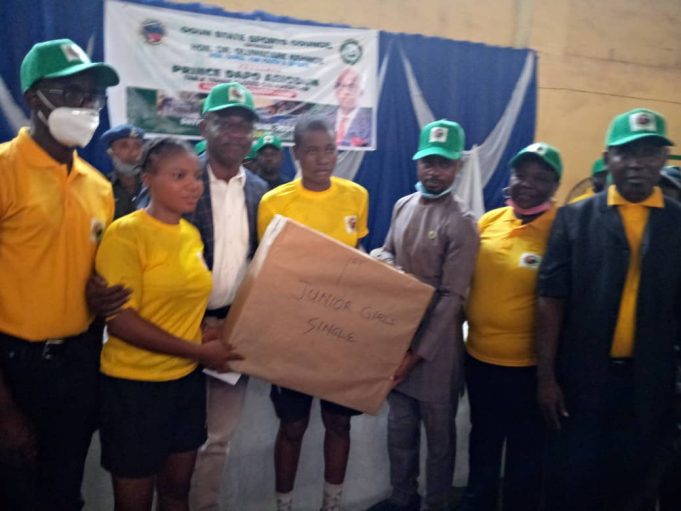 Kareem Karimot from Premier Grammar School, Abeokuta emerged the winner, while Babatunde Busola from Catholic Comprehensive High School was the runner up In the Cadet Girls Single Respectively.

In her Speech, The director of Sports, Mrs Folakemi Iyabode Rotimi said that the competition is to celebrate and appreciate the relationship with the state governor in the last two years.

According to her, “To us as an organization, this event is not only to celebrate the “two year in office of our sport loving governor; His Excellency Prince Dapo Abiodun M.F.R.” but it is to also celebrate the two years of a wonderful and excellent working relationship with Mr. Governor.

“Among many other laudable initiatives of this administration are the sports trust fund and the sports commission bills. We are very hopeful that by the time all these come to reality, the sky will not be the limit of what we can achieve.

“Another important support we got from this administration was in the area of funding during our preparation and participation in the just concluded national sports festival that was held in Edo state.

“Every member of the state contingent to the festival could attest to the fact that the welfare packages that was given to us was superb. And to a every large extent we were all motivated to give our best at every competition that we featured.

“We will like to use this opportunity to thank our amiable governor; Prince Dapo Abiodun and like the proverbial Oliver Twists, we are still looking forward to see more of such patronage and support from him and we will continue to reciprocate the good gesture by always giving our best at every opportunity that we have to represent the state.

“He has always been their for us. Whenever we have cause to call on him for anything, even at a very short notice, he will make himself available for us and he will be ready to go to an extra mile to assist us. A very good example of such instances was his physical presence at the just concluded Edo NSF. His presence did not only provide the desire leadership that we needed at that point in time, it also served as morale booster and  a motivating factor to our team.” She added

In his votes of thanks SSG on behalf of the State Governor Prince Dapo Abiodun MFR, thanked the organizers and everyone that contributed to the success of the program.

He expressed Its admiration to the athletes, and congratulated the winner of the Junior Male Single Adeyemi Olamide for escaping defeat narrowly. He also advised the younger ones to adhere to their coaches instructions

He further implored everyone to spend more time on Sports. According to him “I think it is also good to organize professional matches” as Sports makes you feel youthful again both in mind which reflect in your body.

He made known that Sports especially table tennis had been his passion since childhood which habits he still enjoy till present.

According to the Head of Information of the sports council, Bola Giwa she revealed that the event gathered dignitaries with the love of Sports at heart from all sphere of the State, including the Secretary to the state government, Hon Tokunboh Talabi, Commissioner for Local and Chieftaincy Affairs, Hon. Afolabi Afuwape, Hon. Olamide Lawal, Commissioner for Transport, Engr. Gbenga Dairo who was ably represented by Engr Tosin Akinleye and all the management of Ogun State Sports Council in attendance.

During the grand finale, SSG had a novelty match with the commissioner for Youth and Sports, where Hon. Talabi overwhelmed the spectators with his surprised skill and speed on the table.