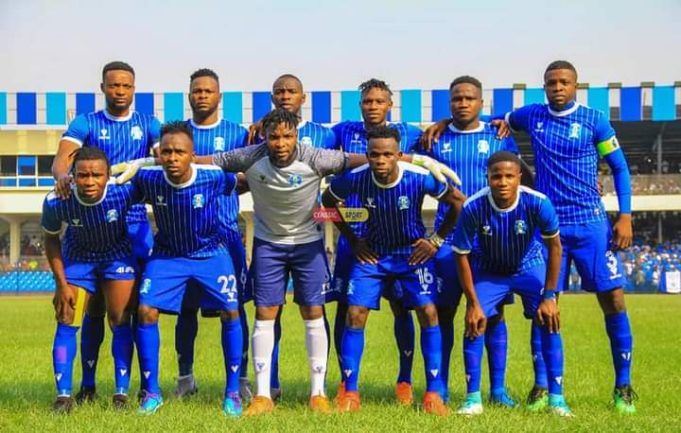 Oyo State Governor, ‘Seyi Makinde, insisted on Thursday that his administration will continue to support the management of Shooting Stars Sports Club (3SC) to become the number one team on the Nigeria Professional Football League (NPFL) sphere.

The governor added that he would like to see the team participate in continental football this season, stating that though the team’s recent results were commendable, they should not relent until they become number 1 on the NPFL table.

A statement by the Chief Press Secretary to the governor, Mr. Taiwo Adisa, indicated that Governor Makinde stated these while receiving the management of 3SC, at the Executive Council Chamber of the Governor’s Office, Secretariat, Agodi, Ibadan
The team which was led by its Technical Adviser, Mr. Dimeji Lawal was in the Governor’s office to officially present the Club’s new signings.

The governor, who unveiled the three new players that recently joined the 3SC – Sunday Faleye, Sunday Akreche and Niyi Adekunle – said the Club’s monthly subventions will be increased starting from February 2022.

He equally commiserated with the team and the family of the immediate past General Manager, the late Mr. Rasheed Balogun, noting that his government would do everything it is supposed to do for his family.

This was as he announced that the Technical Adviser and Team Manager of the Club, ex-Super Eagles player, Dimeji Lawal, would act as General Manager until the government takes a decision on the issue.

He said: “I know you guys are doing well and I want to say congratulations on your result. I want to commend the management for a job well done. You are number 6 on the table now but we want to see you on number 1 and I know you can do it.

“I have been following the trend since you got promoted to the premiership division. Some of the things that the team manager mentioned are germane.

“From some of the things we have done, few things came up. One, is the structure of the team. As a result of the loss of the General Manager, we felt the position should not be vacant. So, I consulted and what will happen is, Dimeji Lawal will play the dual role of Team Manager as well as acting General Manager pending when we can have clarity.

“When the financial request came, we thought of how to get the players in within the period available for us. We felt that, structurally, if we want the team to do well, there must be a way to respond quickly because we know you would need support. So, I decided to look for something close to a sole administrator and I will take the team under the Governor’s Office, which means every time you need anything, you can come directly to me and I will give the support to the team.

“Quite frankly, I want to see this team play at the continental level next year and I want to take responsibility for that by having to keep direct channel with the administration of the team.

“The last thing we also noticed from the challenges we have had to face in the last couple of weeks is the fact that the same subvention you were getting when you played in the NNL is still what you have right now, even though you have to cover the entire country and you also have players that may be more expensive than the players that you used to have. So, we have decided to do something about the subvention.

“We will increase the subventions and it will be directly under my office. But I will ensure that the entire money that will be released through that channel is properly utilised for the benefit of the club and the welfare of the players. And if I need to add personal money, I will do it for us to get our desired result. So, from this month of February, you will have an increase in your subvention and it will be released immediately.”

The governor equally charged the new signings to put in their best to deliver good results to the Club and the state, as, according to him, Oyo State people would not let them off if they do not produce the expected positive results.

He added that the government will also give appropriate reward if the Club can deliver on expectations, saying: “To our new players, we have a vision and Ibadan people would want you to deliver a good result. They will give you the support but don’t let them down.

“On that note, I want to wish you success as part of the team. If we achieve the target of continental football next year, you can be sure that I will be here to give appropriate rewards to you all.”

Earlier, the Commissioner for Youths and Sports, Mr. Seun Fakorede, appreciated the governor for fulfilling all promises made to the Club.

Fakorede, who presented the trio of Faleye, Akreche and Adekunle as the new signings of 3SC, said the purpose of the visit was to “familiarize our new players with you. We would like to appreciate you for what you have been doing for the Club and all this is because we have a governor who is interested in sports and not looking back.

“You assured us that within two years, the Shooting Stars would get back to playing in the elite league and this surely happened. It was not just empty words, you knew what to do to actually make it possible for us.

“So, thank you very much for the love you have for the team and for fulfilling your promises.”

Similarly, the Team Manager, Lawal, appreciated Governor Makinde for his love and passion for the Club, stating that the governor has kept every promise he made to 3SC.

In attendance at the event were the Secretary to the State Government, Mrs. Olubamiwo Adeosun; Chief of Staff to the Governor, Hon. Segun Ogunwuyi; Head of Service, Alhaja Ololade Agboola; Deputy Chief of Staff, Mr. Abdulmojeed Mogbonjubola and other political functionaries.

COVID 19: Bundesliga to Resume May 9

Gunners humiliated at home but go through to last-16