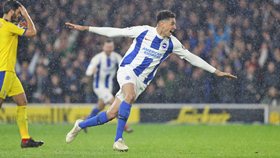 Goals from Pedro and Eden Hazard gave Chelsea a 2-0 half-time lead and although Solly March got a goal back in the second half, the Blues held on to win.

Balogun said: “We gave them two early Christmas presents, one by myself with a poor pass before the second goal.

“In the first half, Chelsea were a bit better in the game but in the second half I wouldn’t say we dominated but we did very well. “I think we gave them a very hard time, which is why there is big disappointment.”

Asked what Albion boss Chris Hughton said to the side at half-time, Balogun said: “He was annoyed by the way we gave away the goals because they were just presents.

It’s more or less unforced errors and just imagine what happens if we don’t do them. “They might have scored from something else but I don’t see where.

“He told us to stay in the game, keep your head in the game and that’s what we did and even topped it a little bit.

“At the end we were close to getting something, which would have been deserved but against those teams you can’t afford to make those mistakes.”