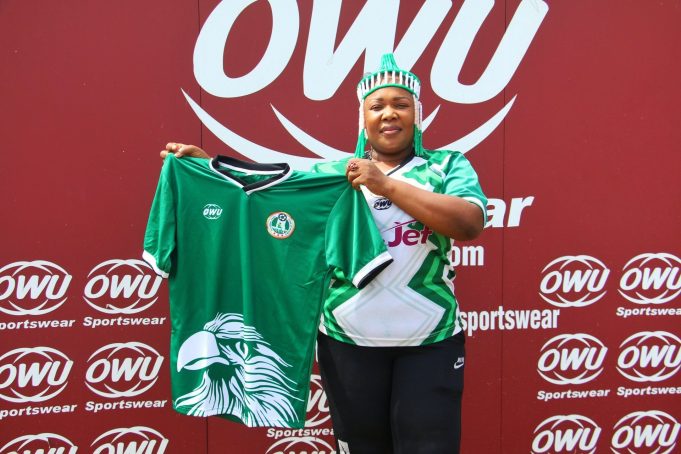 The President of Football Fans Club of Nigeria, Amb. Kemi Ogunfuwa has declared that they are ready for the African Cup of Nations in Cameroon.

Super Eagles will be appearing in the 33rd edition of the Africa Cup of Nations in Cameroon.

Ambassador Kemi disclosed this at the unveiling of their AFCON jerseys at Owu Sports Headquarters in Ojuelegba, Lagos on Thursday.

According to her, “We are ready for AFCON, by weekend we shall set out for Cameroon to support our darling Super Eagles.

In appreciating the kitting company, she said “I appreciate you for being there for us, they have been producing our kits for years and they have come up with a fantastic design for AFCON, it’s a beautiful jersey with lots of accolades on social media and every corner of the sports arena, looking at the jersey you don’t need to ask the country you belong to before knowing it’s Nigeria.

Amb. Kemi added that the jersey is one of the dignities of the club and it’s available for registered members only.

“Jerseys are available but they need to be registered members of the club because we don’t want to see people we don’t know wearing it because it’s our dignity.

Meanwhile, the President of the indigenous Sports kits brand, Barrister Tunji Brown disclosed that the jersey portrayed the true essence of the Super Eagles.

In his words, “The design is to portray the name that Super Eagles wear which is exactly what we did and it portrays the true essence of the team, this away jersey portray what they have before.

He added that Supers Eagles is going to Cameroon to lift her Fourth AFCON trophy adding that Nigeria goes to all competitions with aim of winning.

“Nigeria doesn’t go to competition without the aim of winning, the last time we came third and I’m sure they are going for a win this time around except nothing less from them this time around,” he said.

Nigeria’s first game is against Egypt on Tuesday in Garoua