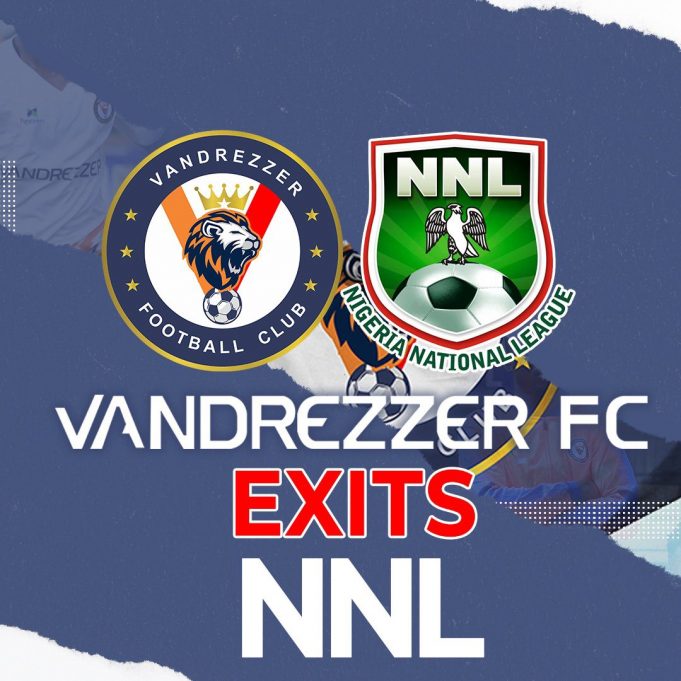 The Management of Vandrezzer Football Club have withdrawn from the ongoing 2020/2021 Nigeria National League season.

According to a statement on vandrezzerfc.com state: “The decision becomes imperative in view of the fact that the Management and Board of the Nigeria National League as presently constituted has demonstrated enough resolve and communicated same to us in clear terms that our club, with its transformation agenda is not in any way needed in the NNL league.

“Recall that in our bid to reposition the league and open it up to become visible enough to be able to generate revenue in accordance with global best practices; we requested and received a written approval from the hierarchy of the Nigeria National League an approval to stream live, all our games home and away. Our intentions were to expose the league to the world, at enormous expense to us and our sponsors, in order for easy marketability and standardization.

“Consequently, massive investment was therefore deployed on manpower and equipment in line with industry best practice to deliver quality content in order to promote the league.

“Our first game in Ogwash-ukwu was streamed live through the use of 8 cameras. We did same in our week 2 game in Lagos. Same in week 3 at Rojenny stadium in Oba. However, in week 4 against Osun United in Osogbo, hoodlums amongst the fans, defiantly allowed into the stadium against the directives from the NNL and NCDC on Covid-19 pandemic protocols; attacked our cameras, vandalized the cables, intimidated players and officials of our team, including the appointed match officials and prevented further recording of the game. Upon a written protest submitted to the NNL on the matter, and in a landmark decision by the League body, Osun United FC was banished to Ilorin, the result of the match was cancelled and scheduled for a replay while Osun United FC were penalized and asked to bear the costs of vandalized items of our club. To our greatest shock, within days of the decision, the NNL reversed itself upholding the result of the match and gave three points back to Osun United. With this development, Vandrezzerfc who was the victim of assault and intimidation had to make another payment to register our displeasure over the new decision. We promptly made a written appeal on this decision of the NNL, which as at the time of this release, is yet to be heard.

“In week 6 in Calabar, Rovers FC refused to allow us into the U. J. Esuene stadium with more than 2 cameras until a directive from their State Government compelled them to do so eventually. In Omoku, the General Manager of Go Round FC, Soni Ubo insisted that Vandrezzer FC must make a payment of One million Naira only (N1,000,000) before we could be allowed into the stadium to live stream the match. Our club official on ground quickly informed the COO of the league, Emmanuel Adesanya of the development on phone and he advised that we negotiate with Go Round FC since its their home game. The game could not be played due to the insistence of Go Round FC not to allow our camera crew until we pay N1,000,000:00. Even the urgent letter transmitted to the NNL informing them of the hostile reception at Omoku was ignored. We recall our recent experience with Osun United FC, where our crew and the match officials were violently intimidated. Our crew survived the onslaught on them, with no lives lost only because they decided to be docile and let the home team have their way, in the believe that the league management would see the video evidence we were able to retrieve of the event, which was considered sufficient to give an insight to the situation during the match. Even the referees were held hostage for a time before the second half of the game commenced under duress. Stemming from this previous experience, and in consideration of the lives of our players, coaches and crew; and in order to avoid any confrontation with the home team at Omoku; Vandrezzer FC after waiting until the final hour for a reaction or resolution by NNL, when it was not forthcoming, we made the decision to leave Omoku.

“During the hearing of the matter, recently in Abuja, the NNL officials failed to acknowledge the main reason why the game was not played which was the insistence on the payment of the sum of One million naira by the Go Round FC. Thus, appearing to have come into the meeting with a predetermined position. It is therefore not so surprising that the same NNL who had issued Vandrezzer FC the authorization letter for streaming her home and away matches, have now through a letter dated 14th April, 2021, awarded a board room 3 points and 3 goals to Go Round FC. This decision is inspite of NNL’s directive to Vandrezzer FC for match streaming and the blatant disregard of the directive by Go Round FC. In addition, a fine of N1,000,000:00 was issued against Vandrezzer FC for not staying back at Omoku to play the match and subsequently report whatever eventuality.

“It is perhaps pertinent to state here that on the same day that Vandrezzer FC was constrained to withdraw from playing at Omoku, four other NNL teams vehemently refused to honour their fixtures on account of bad officiating pervading the league. These teams have now had their games rescheduled for this week-end while Vandrezzer FC that travelled 3 days before the game in Omoku, with its attendant costs, are being penalized.

“It is obvious and crystal clear from the aforementioned that the management of the Nigeria National League are not in anyway comfortable with the transformation and advancement being brought to bear in the running of the league and would therefore stop at nothing to frustrate any team or club attempting to change the narrative.

We wish to use the opportunity provided by this medium to express our sincere appreciation to our fans, supporters and sponsors for their steadfast believe in us.

This is a very tough decision for the club but it has to be made. It is indeed a dark day for Nigerian football!

Our heart bleeds over the fate of multitude of persons employed in our organization that would be added to the growing list of the unemployed. It is a shame that at the turn of the 21st century and with the advancement of technology in the world of football, we are still haggling over the number of cameras to be deployed to live stream a match in Nigeria, and there is no uproar about it.

How then do we hope to improve our game and compete with developed leagues, even across Africa?

We at Vandrezzer FC are happy to have contributed our little quota to the process of showcasing our beloved country to the world and promoting the league, with enormous resources deployed; and we shall not hesitate to do so all over again whenever the opportunity presents itself in a conducive atmosphere, hopefully in the near future.