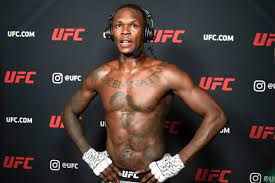 Nigerian born, Israel Adesanya has retained his UFC middleweight champion after a victory over Marvin Vettori as he retained his undisputed 185-pound title in the main event of UFC 263 by  unanimous decision (50-45, 50-45, 50-45) in Glendale, Arizona.

The pair had previously met, when Adesanya claimed a split-decision victory over Vettori in April 2018 in the Nigerian-born Kiwi’s second UFC bout.

The stylebender showed his class with a virtuoso performance as he picked apart the Italian over the full five-round championship duration.

Vettori started the bout in aggressive fashion and landed an early takedown, but Adesanya soon settled into his work and dominated the striking exchanges, using repeated kicks to Vettori’s lead leg to punish the challenger from range.

Adesanya’s control of the bout caused plenty of consternation in Vettori’s corner between rounds, as coach Rafael Cordeiro implored his man to be more aggressive in his pursuit of the takedown.

The win is Adesanya’s third title defence after losing to Jan Blachowicz in a bid to add the light heavyweight title to his laurels.