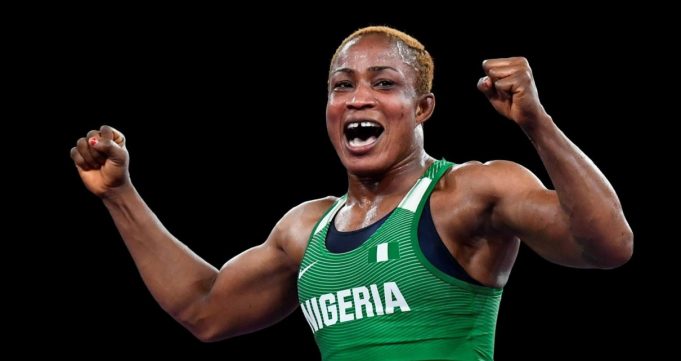 Blessing Oborududu on Tuesday entered the record books as the first Nigerian to win a wrestling medal at the Olympics, following a silver medal performance at the Tokyo 2020 Games.

The 10-time African champion settled for silver after losing 4-1 to American world champion Tamyra Mensah Stock in the final of the 68kg weight class in an explosive contest that can easily pass for a classic.

Ukrainian Alla Cherkasova and Meerim Zhumanazarova – who like Obourududu, became the first wrestler from Kyrgyzstan to win an Olympics medal – both won bronze.

Oborududu went into Tuesday’s final at Makuhari Messe Hall as the underdog against the world champion Mensah Stock, who defeated her 6-1 in their last meeting at the 2019 World Championships in Kazakhstan. However, the Commonwealth champion was unfazed by the impressive credential of her opponent throughout the all-action finale.

With both wrestlers approaching the contest offensively, Mensah Stock got on the scoresheet first, with a take down for 2 points, while Oborududu pulled one point back, when she pushed the American off the red circle.

However, another 2-point score by the 28-year-old handed her a 4-1 lead at the end of the first round.

Both wrestlers failed to score further points in the second round, as Obourududu sealed her place in history with a silver medal.

Earlier, Oborududu’s compatriot Aminat Adeniyi lost 4-2 via pinfall to Ukraine’s Iryna Koliadenko, despite leading 4-0 in their round of 16 bout.

Commonwealth champion Adeniyi was hoping for Koliadenko to reach the final, so she could via for a bronze medal through the repechage.

But Koliadenko was stopped in the semi-final by Aisuluu Tynybekova of Kyrgyzstan, who won 10-0 via technical superiority.

Meanwhile, second seed Odunayo Adekuoroye will begin her quest for an Olympic medal in the 57kg weight category on Wednesday.

The 3-time World championships medallist Adekuoroye will be up against Anastasia Nichita of Moldova in the round of 16 around 4.00am Nigerian time.