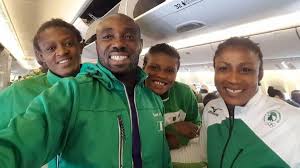 Head coach of Nigeria women national wrestling team Purity Akuh has hailed the exploits of Commonwealth champion Blessing Obourududu, who won a historic silver medal for the country at the just-concluded Tokyo 2020 Olympics.

Last week, the 32-year-old Oborududu became the first-ever Nigerian to win a wrestling medal at the Games, after she claimed silver in the 68kg class following a 4-1 loss to American World champion Tamyra Mensah Stock in the final.

Oborududu is also the second African woman to win an Olympic medal in wrestling after Tunisian Marwa Amri.

While applauding the 10-time African champion, the tactician noted that her achievement in Tokyo was a product of pure hardwork, and also praised the efforts of the other wrestlers who were unsuccessful in their attempt to win laurels at the Games.

“Congratulations to Blessing Oborududu for winning the first-ever wrestling medal for Nigeria at the highest level of sport – the Olympics,” he wrote on his Facebook page.

“She worked hard for this glorious moment, and I’m so happy and proud of her.

“And to the rest of my champions Odunayo Adekuoroye, Aminat Adeniyi and my wrestling baby Adijat Idris, I appreciate your efforts, consistency and cooperation at this Olympics. As the sports slogan goes, ‘we win some, we lose some’.

“The bottom line is we are coming back stronger! More so, you all worked hard to break this long jinx. Alongside Oborududu, we made this history together, that is what matters and you all remain my champions forever!”

The seasoned coach was also appreciative of the tremendous support the wrestling team received from the Minister of Youth and Sports Development Sunday Dare, the Nigeria Olympic Committee (NOC) and the Caretaker Chairman of the Nigeria Wrestling Federation (NWF) Daniel Igali over the years, which culminated in Oborududu’s record performance in Tokyo.

“I want to also use this medium to appreciate the Minister of Youth and Sports, Hon. Sunday Dare for the fatherly care and support he has been giving us. We appreciate you, sir,” he added.

“I also thank the Nigeria Olympic Committee for always being there whenever we need them.

“Special thanks must go to the back bone of the Nigeria Wrestling Federation Hon.Daniel Igali, our president. In reality, Nigeria wrestling is blessed to have him. His selfless service in kind, cash and prayer is unquantifiable. His encouragement, push and support for the team fetched Nigeria it’s first-ever medal in wrestling at the Olympics.”