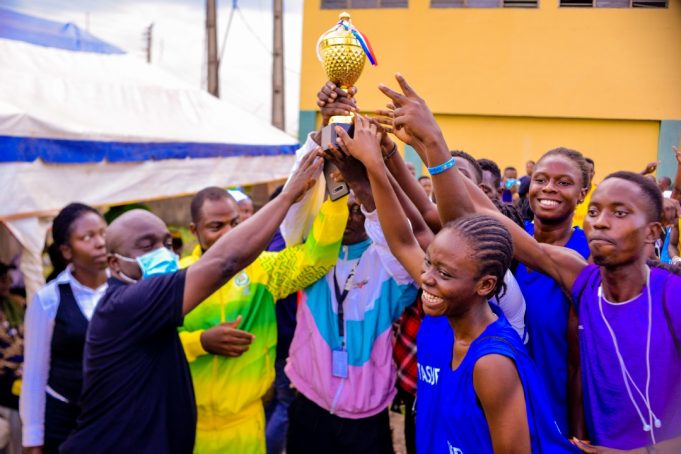 GATIG returns after 12 years with 17 games in Abeokuta as Six tertiary institutions battled for laurels in Abeokuta for the three days event.

Tai Solarin College of Education emerged the second runner up with Five Gold, Five silver and Seven Bronze and Abraham Adesanya Polytechnic and Ogun state College of Health were ranked 4th and 5th on the log respectively.

Reacting, the State Commissioner for Youths and Sports, Dr. Oludare Kehinde has revealed that the game has given the state opportunity to discover talents.

“The whole idea of GATIG is not just to engage in physical activities or battle for glorious trophies. We have used this GAME to discover raw talents amongst the students of our tertiary schools in Ogun State. We shall therefore proceed to assist them in horning their skills for national and global impact. In the interim, those selected will go on to represent the State at the forthcoming National Sports Festival in Delta State and other National/International Competitions. We have also been successful in instilling qualities of courage, character, charisma, creativity and competence in our students especially because these are necessary virtues in this Post-COVID era. The whole essence of education is beyond academic laurels and certificates.

“Our joy in the State is not just to churn out graduates annually but to build great minds who will be quintessential both in character and learning. You have participated in Seventeen (17) different Games which has further improved your rational, cognitive, analytical and psychological skills.” he said

He said “GATIG is the most important and most significant sporting event that Ogun State can be proud of, I want to thank the governor of Ogun State who has mandated the Hon. Commissioner to take up this responsibility to ensure that there is a reactivation of the Gateway Tertiary Institution Games”.

“When we introduced GATIG, it was responsible for the success achieved by Ogun state, it took us from 19th position to third in the National Sports festival, and then 2nd in Kaduna in 2009, with Prince Tunji Onatolu and his team doing a great job back then”

“The governor has shown that he is willing to give priority attention to the sports sector and thankfully, the Hon. Commissioner is also working round the clock to ensure that the dream of so many school boys and girls is achieved”

Meanwhile, Schools in Abeokuta are not present for the competition, schools like Moshood Abiola Polytechnic, Federal University of Agriculture and Federal College of Education.