Ablaze Football Academy are happy to see the young striker return to action after a terrible injury he picked during training session which led to a dislocated knee.

The hardworking skipper for the Tblizz Rangers has been out for months with a lot believing he can’t continue with his dream but the young attacker moved up high with his passion and kept his heart in the game.

Daniel is known to be a popular threat to the blazers scoring thrice in Twp appearances against the team and the manager always have nothing but praise for the young lad.

“His leg isn’t as straight as he used to,he has gone ‘K’ but his parent still gave him such encouragement we are happy such parent still exist”

“Daniel is missed by everyone simply because he is a joy to watch,I hate seeing him score against us but I love to watch him play”

“He will boost the team ahead of their upcoming tournament, but we hope he gets even better, such talent should be discovered early,because his passion must be met with success” he concluded. 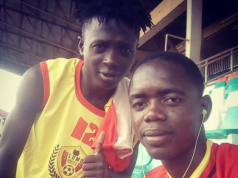