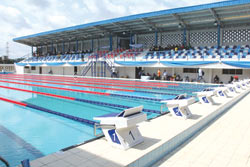 The LSSC boss, speaking at the opening ceremony of the tournament held at the Lagos Preparatory School (LPS), described the tournament as an example of private and public sector partnership for grassroots sports development.

The championship witnessed a large turnout of participants supported by their parents and guardians as the 50 metre swimming pool of the Lagos preparatory School (LPS) was filled with exceptional display by the swimmers.

“This initiative is one of those that we have been looking forward to in Lagos, a partnership between the private sector and the Lagos State Sports Commission. Also, the initiative keys into our vision for schools sports. Look at the turn-out we have here today, look at the exceptional talents that we are watching and developing. Some of these athletes have gone out of the country to win laurels for their schools and yet we are not even aware of them and that is why going forward, LSSC will be working very closely with the private schools system.

A situation where we only deal with public schools will not augur well for us in terms of sports development,” Tandoh said.

Lagos Based Academy Shut Down Training over COVID19

Bereckiah Sport Signs deal with US agency to promote sports in...