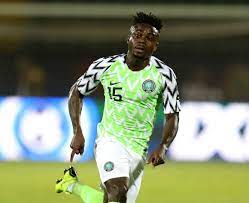 Super Eagles star, Moses Simon has donated N200,000 to two Lagos-based Football club, after they impressed the Nantes star during a test game in Lagos on Monday.

“His desire to use sports, particularly football, to reposition the youths under his area is commendable.

“The idea will no doubt play a role in boosting the relationship between the individuals. That trust will go a long way because it’s a noble idea.”

Last year, Simon drilled boreholes for the people of Obagaji Agatu community in Agatu Local Government Area of Benue State, where his father hails from.

He has also reached out to Internally Displaced Persons IN Southern Kaduna, donating clothes, food and drugs, paying for their medical bills and a donation of N500,000.

Simon is expected to depart for France in the coming days for Nantes pre-season training.

They will face Watford on July 31 in their first pre-season friendly at Vicarage Road.

Nantes avoided the drop last season after they defeated Toulouse 3-1 in the relegation playoffs in May.