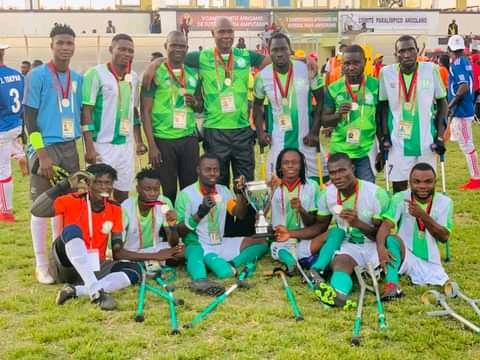 Less than a month to the Amputee Nations Cup in Tanzania, the Nigeria Amputee National Team also known as ‘Special Eagles’ has appealed to the Government and all well meaning Nigerians to support the team ahead of the continental showpiece.

Speaking during an interview with Silverbird TV on Thursday, and monitored by our correspondent, the Captain of the team, Sarafadeen Olalekan says the team is yet to open camp and have a definite preparation ahead of the competition billed to for November 26th to December 5th in Tanzania.

Olalekan who led the team to their hisoric silver medal win in 2018 Angola Nations Cup thanked Nigerians for their support for the team, while urging them to rally round the team in yet another trying times.

“Presently at the National team , things are not going the way it supposed to be as our preparation towards the next Nations Cup has not been encouraging. Up till this moment, we have not opened the camp and also all the logistics have not been put in place”

Stressing how difficult it is to play Amputee football, he noted that the team couldn’t also invite some of its foreign based players.

He emphasized the importance of going to Tanzania and getting a podium finish which will enable the team feature in the next year Amputee world cup coming up in Turkey- a novel approach different from the last appearance which was based on invitation.

“There’s no funding. Even now, we have not gotten flight ticket and we will be travelling with 18 man team. We need support for logistics, feeding and kicking” he quipped

He added that the team is yet to also get recognition and compensation from the government since its exploits in the last Nations Cup.

The 7th Amputee Nations Cup will be featuring 18 countries more than the last edition which had 10 teams on the card.

Olalekan, who lamented that the team also lack the best of facilities for training believes that the they are repleted with Technical crew and players that are capable to make the country proud.