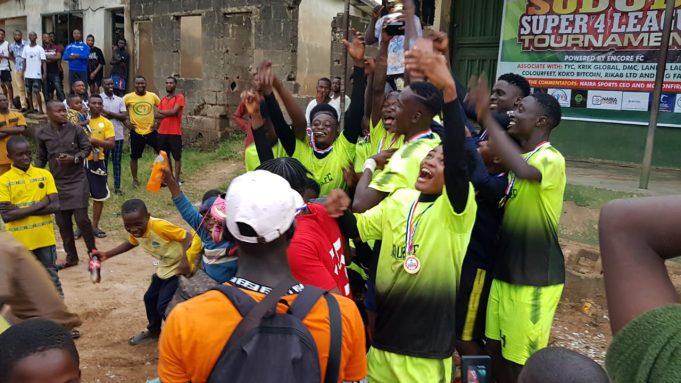 Sodubi Fc have emerged the champions of Sodubi Super 4 league after beating TYC FC in a penalty shoot out.

Sodubi and TYC played a 1-1 draw after the regular time while Sodubi sealed the trophy in the penalty shootout.

“I feel excited everything is good. It’s not new to me because I try every day, I train every time to make me good, I thank God. On the field, I’m the leader of my team so I had to strategize again and change the formation. A big shout out to my team, my fans, I say thank you to all of them. ” he said

For TYC Captain, Akinyemi Quadri Idowu said he had lost two finals and he will come back stronger.

According to him, “I feel so happy because it’s not easy to enter final, this is my second final and I lost the two but I give thanks to almighty. Most of the players, we are playing together I know the foot they use, but they changed it because they know I know. Before we started the match there was an argument between me and the players, we settled it before the match but the issue continued on the field.”