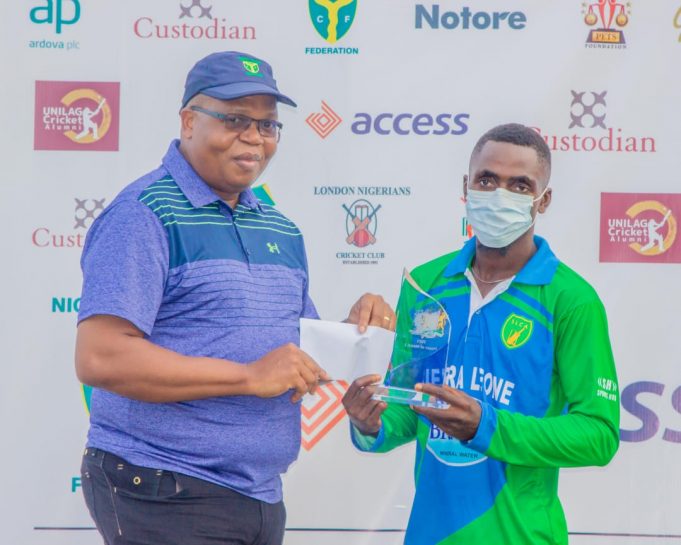 Sierra Leone puts Nigeria to the test in a six-day bilateral cricket match.

On Tuesday, at the University of Lagos cricket pitch, the first pre-World Cup qualifying practice series between Nigeria and Sierra Leone ended with the visitors defeating Nigeria.

Sierra Leone won the coin toss and elected to bowl first. Their bowlers were in such good form that Nigerian hitters were unable to score the desired number of runs. Nigeria was under pressure after losing four wickets early on.

Isaac Okpe and Peter Aho, who scored 36 and 27 runs respectively, were the leading individual scorers for Nigeria. In a 20-overs game, the Senior Men’s cricket team scored 99 runs and were all out.

Sierra leone boys needed 100 runs to win and they fought hard to pass the target and eventually won in the last ball with six batters yet to play.

Miniru Kpaka of Sierra Leone was the man of the match for taking 4 wickets and the best bowling economy.

The Patriots of Sierra Leone were offered $100 by CEO Philip Amara as part of the promise of winning the opener against the Nigeria Yellow-Green cricket team.

The Head Coach for the Nigerian Yellow-Greens, Asanka Gurusinga expressed his dissatisfiedment as his side narrowly lost the opening encounter. “I am disappointed and the team is disappointed too because to win a T20 game, every department has to bat, bowl and field. Our fielding did not play and our bowling wasn’t up to the mark. When you do that, you can’t expect to win. To be honest, Sierra Leone played much better. I knew it is going to be a very difficult game because the unknown is a difficult thing. Underdogs are the most difficult to deal with. We are going to regroup tonight to come back strong.”

The second match on Wednesday will continue from 12noon against the earlier schedule due to poor weather conditions in Lagos.