Centre-back Naldo completed Schalke’s
thrilling four-goal fightback at rivals Borussia
Dortmund with a 94th-minute header on
Saturday as the Ruhr derby finished in a
frantic 4-4 draw.
Having been four down after just 25 minutes,
Brazilian Naldo’s last-gasp header brought
Schalke back from the dead against troubled,
10-man local rivals Dortmund, to snatch a
dramatic Bundesliga point.
“Schalke showed they have character and the
mentality to offer a real spectacle,” said
Schalke coach Domenico Tedesco.
Schalke, who are unbeaten since September,
are third in the table, three points ahead of
fourth-placed Dortmund, and five behind
leaders Bayern Munich, who play later at
Borussia Moenchengladbach.
The hosts had Pierre-Emerick Aubameyang
sent off in the 72nd minute for two yellow
cards with the score 4-2 after giving Dortmund
an early lead, but Borussia’s defence collapsed
in the second half.
Dortmund coach Peter Bosz is under
increasing pressure as his side are now
winless in their last six league games.
“It’s hard, you only feel disappointment,” said
the Dutchman.
“When you lead 4-0, that shouldn’t have
happened.
“After the red card, we didn’t play any more
football, lost the ball too quickly and didn’t use
our room, but I don’t want to look for
excuses.”
The biggest win in a Ruhr derby — 10-0 to
Schalke in 1940 — looked under threat when
Dortmund raced into a 4-0 lead.
Christian Pulisic’s cross was flicked on by Nuri
Sahin to the far post where Aubameyang slid
the ball home on 12 minutes.
Dortmund doubled the lead six minutes later
when Sahin’s free-kick was volleyed into his
own net by Schalke midfielder Benjamin
Stambouli.
The Frenchman was then beaten for pace on
the flank by Aubameyang, before the Gabon
international fired in a superb cross for Mario
Goetze to head in the third on 20 minutes.
Schalke looked dead and buried when Raphael
Guerreiro volleyed home Dortmund’s fourth
with just 25 minutes on the clock.
– Key substitutions –
In a bid to avert a debacle, Tedesco brought
on midfielders Leon Goretzka and 20-year-old
Amine Harit on 34 minutes.
The double substitution tightened things in the
middle and with Schalke putting in the tackles,
it was a totally different story in the second
half.
The away side pulled their first goal back
when Stambouli’s long floated pass was
headed home by striker Guido Bergstaller on
61 minutes.
Harit pulled another goal back four minutes
later, taking advantage of terrible defending to
fire home at close range.
Aubameyang was given his marching orders
after clattering Harit and Dortmund were
barely holding on when midfielder Daniel
Caligiuri buried Schalke’s third on 86 minutes.
In a frantic finale that included seven minutes
of stoppage time, Schalke deservedly got their
equaliser when Naldo escaped his marker at a
corner.
He powered home a header, sparking wild
celebrations, but tensions boiled over with the
scores level for the first time.
Both Sahin and Schalke captain Ralf
Faehrmann received yellow cards after the
final whistle as the teams got into a shoving
match.
Elswehere, RB Leipzig remained second after
their 2-0 win at home to second-from-bottom
Werder Bremen with goals from Liverpool-
bound midfielder Naby Keita and Brazilian
defender Bernardo.
Bayer Leverkusen moved up to sixth with a 1-0
win at Eintracht Frankfurt with Germany
forward Kevin Volland scoring the winner.
Michael Gregoritsch and Alfred Finnbogason
scored for mid-table Augsburg as they came
from behind to seal a 2-1 win over ten-man
Wolfsburg, who had Maximilian Arnold sent off
after only 11 minutes.
That was Wolfsburg’s first defeat since losing
to Stuttgart in September. 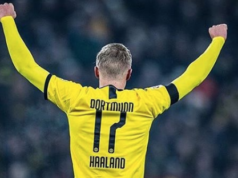