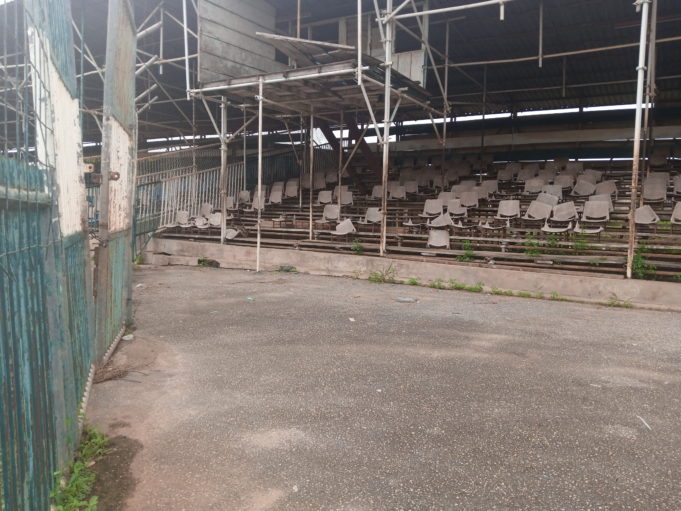 One biggest undoing identified as chiefly responsible for the rot in facilities is the common norms in Nigeria to look away when it comes to public edifices.

In Ogun State, late Chief MKO Abiola is revered as a legend and pioneer of sports development in the state.

He had single-handedly spent millions to restore Asero Stadium to its former glory and true to his words, the stadium became a slaughterhouse for his pet club Abiola Babes.

But when MKO was snatched away by the cold hands of death in July 1998, he seemingly dragged his maintenance etiquette to his grave with him and sports facilities in Ogun state paid dearly for his demise.

If you search the name Asero Stadium in one of the search engines, Muda Lawal stadium will be among the first auto-complete suggestions in seconds.

The results page will load articles, interviews that say much about the poor state of facilities in Ogun State.

The stadium did not escape the rot despite being renamed after one of the late sons of the state, Mudashiru Lawal, a member of the victorious Green Eagles that won the Nations Cup in 1980.

Located along Ibadan-Abeokuta road is a national edifice where its main bowl is only good enough for growing cassava, maize, and hideout for hoodlums.

Its dilapidated state was worsened by ex-governor Senator Ibikunle Amosu who turned the edifice to a trailer park in 2012.

Sport is a big earner and with the current rate of youthsunemployment in the state, engaging youths in rewarding employment and sports activities are vital if the state is to enjoy the peace and a new lease of life.

A visit to Muda Lawal stadium and what do you see; a complete decay of sports edifice and a hideout for hoodlums. Also, the plastic seats are in a deplorable state with some of them either damaged or completely removed while the Media stand had also given way, leaving an open chasm in the air.

It’s the same story at Gateway Stadium Ilaro, Dipo Dina in Ijebu Ode with most of the facilities used for social functions only.

With the stadium in shambles and other training facilities, which serve as a gym and offices for athletes and administrators in disrepair, the state’s  clamour to produce it’s own Blessing Okagbare or even another Falilat Ogunkoya who hails from Ogun on the tracks may have to wait a little longer.

Having a historical stadium in the state deserves regular maintenance, but nothing has been done despite years of deliberation on the need to restore the stadium to its lost glory

In a report published by News Agency of Nigeria in December 2017, the then state sports commissioner, Afolabi Afuape said the state will need a whopping N2.7BN to renovate Abiola Stadium and Muda Lawal stadium.

“There is a need to put down structures and templates in the state for preparations for the National Sports Festival.

“We are also developing initiatives to revive grassroots sports by setting up a fund mobilisation machinery and creating legacy projects for annual implementation,” Afuwape said.

Reacting to the Economic impacts of the poor state of the sporting facilities, the Egba Divisional Sports Officer, Opeoluwa Osoba lamented that the stadium has not been generating funds for the government and its negative impact on the people of the state leaves a lot to be desired.

“Aside from sports event, if the environment is good it can still host several events which include Sports functions, religious gatherings, exhibitions among others to generate funds for the government.

“It will also encourage business patronage because of it’s healthy and peaceful environment. Just like MKO Stadium where trade fair and other events are being organized, this can also generate funds” he said

According to the state Head of Coaches, Oluseyi Sonde, the poor state of stadia in the state has affected the productivity of talents in the region and the state can no longer host national or international competition.

“The situation at the Muda Lawal stadium is really affecting the production athletes in the state. Around Asero area, we have between four to five schools which comprises of tertiary, secondary and  primary schools) and to me is a catchment area but because of the present structure of the stadium, we cannot organise competitions.

” We don’t have good tartan track and it is not easy to delve into the training of athletes just like we do in football. It is not conducive for proper training because the place looks unkempt.

” I’m not blaming the management in charge of the stadium, there is nothing they can do without the availability of funds and that explains why producing athletes is a difficult and impossible task in the state.

“Your facilities must be inspected and once its not up to FIFA standard if it’s football you’re bidding for, you can be sure you won’t be considered”  he said

” I believed there should be a renovation in the stadium every five years although we have started taking our steps, we wrote to Mr governor through the media and he took it upon himself to look into it. I believe renovation will start soon.

“More facilities, which include the Olympic standard swimming pool, standard Tennis Court, Volleyball court among others will be back to the stadium.” he said

On the state’s plan to relocate Tippers and Lorries away from the stadium, he confirmed that plans are in the pipeline to move them out as soon as possible.

“On tippers and Lorries using the stadium facility as a parking lot, it wasn’t a workshop for them. We were in Port Harcourt for the 2011 National sports festival when we received a call that tippers and lorry drivers have converted the stadium to their garage. Secretary to the State Government denied ever given them the go-ahead to move there but assured they will move out of the place soon,” Adebanji said.

For Coach Felix Somide of Patriots Fc, the poor state of Muda Lawal is an eyesore.

“It used to be the only major stadium when you come to the southwest. Abiola Babes and co used to play there and the pitch then was of top standard but you know the bane of Nigerian sports is lack of maintenance,” he said

In what is being described as the state’s darkest hours in sports, the current government must understand the consequences of abandoning its youths instead of keeping them busy by engaging them in sporting activities. An idle mind they say is the devil workshop. The state must turn its attention to revamp sports in the state and the first step towards achieving that is to revisit the idea of stadium rehabilitation. MKO may be dead but maintenance etiquette can be developed and improved upon in the state rather than play politics with Sports. 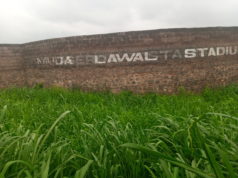 Adekuroye, Amusan, others get adopted as Minister launches initiative to support athletes