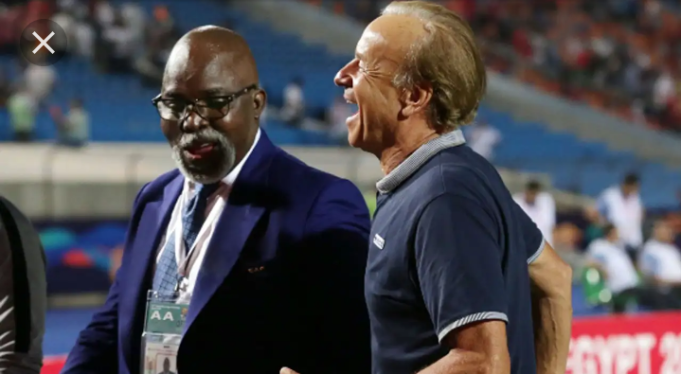 Gernot Rohr’s announcement as Nigeria manager on August 9, 2016 was met with little fanfare as he was still not much known in West Africa at the time, but he has certainly made every Super Eagles fan aware of his presence ever since.

Controversies travailed After Super Eagles were narrowly eliminated in the semifinals of 2019 African Cup of Nations by Algeria via a last minute Riyad Mahrez free kick which made Super Eagles fans called for the sack of the German.

Meanwhile, the Nigeria Football Federation (NFF) extended the Franco-German tactician’s Contract till December 2022, lets look at the possible journey of the tactician with the Super Eagles in next two years.

Rohr took charge of Gabon in 2010. His main task was leading a young Gabonese side past the round of 16, and he did just that as Gabon were narrowly eliminated by Mali (5-4) after a burgeoning young Pierre-Emerick Aubameyang missed his penalty in the quarter-final shoot-out.

Short and tumultuous spells followed at Niger and Burkina Faso until August 9, 2016, when the Nigeria Football Federation hired him to take over the vacant post of technical adviser and manager on a two-year deal.

Rohr was given the super Eagles Mandate after Nigeria failed to qualify for two AFCON in a row, he turned things around by qualifying Nigeria for 2019 AFCON in Egypt and 2018 FIFA World Cup in Russia where Nigeria was the first African nation to qualify for the World Cup.

Since taking the job, Rohr has been in charge of 38 officials Games for Eagles winning 21 times, 7 draws and 10 looses.

With Rohr’s Contract to expire at the end of June, the Nigerian Football Federation (NFF) and the German had been negotiating new deal which was later accepted by the two parties.

The terms of the deal are that He must reside in Nigeria, His salary would be paid in Naira, He must watch the NPFL (Nigeria’s domestic league) to increase the amount of homegrown players in the national team, Qualify for 2022 World Cup and Win 2021 AFCON.

Despite the conditions in the deal, Rohr was hellbent to continue with Super Eagles. “I want to finish my work in Nigeria, I want to go to the next AFCON and World Cup, which means we must continue working together.” he told Colin Udoh in an Instagram Live chat

The NFF later announced that Rohr’s Contract has been extended. While announcing the extension of the contract, the NFF President Amaju Melvin Pinnick said that he has ‘never lost confidence in Rohr’

Pinnick while announcing the extension of Contract and Completition of the deal on his twitter page expressed that ‘the focus is qualifying for seventh World Cup finals and the 2021 Africa Cup of Nations in Cameroon.’

According to Pinnick, “I’m happy to announce that the @thenff and Coach Gernot Rohr have concluded all contractual discussions and he will stay on as Coach of the Super Eagles. We have always had confidence in his abilities and we are confident that the national team can only go higher from here.

“We can now focus on qualifying for the World Cup and winning the Nations Cup. In truth, these are sacrosanct and Coach Rohr is aware of these conditions.

“With the distraction of the contract talks out of the way now, we can now face our football on the pitch, totally. Again, I never lost confidence in Gernot Rohr’s ability to take our football forward and I’m convinced our football will only get better from here on” he said

Rohr has claimed that he is building a team that will dominate Africa and this was among the things that led to the extension of his contract despite the conditions attached to it.

There has been increase in performance levels now because Rohr is willing to experiment with new tactics, and shows no favoritism for certain players either.

Aside from the goalkeeping department, there are players playing regularly in their various clubs in the team.

Currently, Nigeria’s current squad is the third most valuable side on the continent (€191.1 million), behind Morocco (€191.9 million) and Senegal (€317.73 million), which automatically means it’s the 22nd most valuable national team in the world, and popular amongst football betting websites.

With the young energetic squad, the future can be said to be bright with the Franco German tactician in Nigeria’s Green white Green.

Following Rohr’s contract extension, football faithfuls especially those that have been keenly following the Nigerian football system has expressed the concerns and optimism in Rohr’s leadership.

Majority of those who reacted to Pinnick’s post on social media read the development as positive.

Bello Ibrahim, a sport lover on twitter said, “Thanks for giving Rohr another chance despite the stringent clauses in the contract. However, it’s high time the NFF left the coach to his job. You guys should stop influencing Rohr’s decision on which player to select.

Let him work free-handedly, so we get to assess him after.”

On his part Shola olawale said that, “It’s important to win the AFCON in 2021, but it’s NOT sacrosanct. 24 teams will be competing, NOTHING says we MUST win it, it’s not a given. Let’s consolidate on our progress & qualify for the World Cup. Hopefully, we will win AFCON 2021; but 23 other teams have same hope.”

“My problem with Rohr is simple. He is too conservative. I don’t and can’t remember the last time we played beautiffootballbal since Rohr came. What we see is slow build-up and counterattack tactics. Especially when the opposing team is perceived to be an A-team.”, Segun Ogunbiyi opinionated