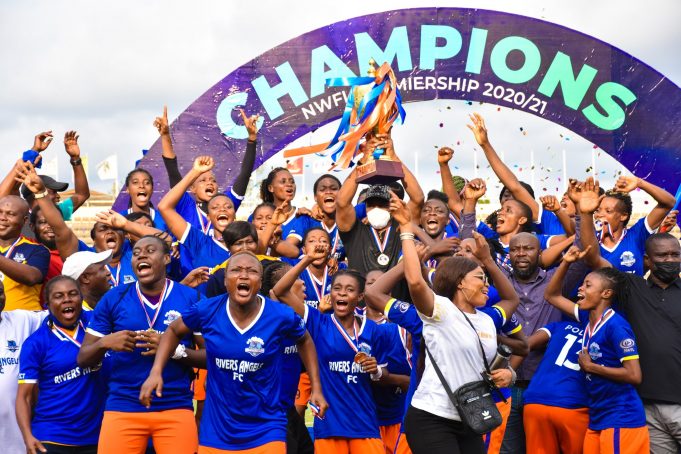 Rivers Angels have emerged champions of the 2021 Nigeria Women’s Football League after annihilating Sunshine Queens 4-0 in the final of the Super 6 at the Dipo Dina International Stadium in Ijebu Ode, on Sunday.

The win will see Angels represent the country in the WAFU Zone B playoffs for the maiden edition of the CAF organised Women’s Champions’ League.

Angels finished the Super 6 with 11 points ahead of Delta Queens and FC Robo who both ended their campaign with nine and eight points respectively while Sunshine finished fourth with seven points.

The Edwin Okon tutored ladies bounced back from their disappointing goalless draw against Delta Queens in their opening game to record 4-0 wins against Bayelsa Queens, Edo Queens and Sunshine Queens in their final match.

Some of the dignitries present at the final in Ijebu Ode are sports minister, Sunday Dare, Nigeria Football Federation president, Amaju Pinnick, NWFL Chairperson, Aisha Falode amongst others.

Speaking at the closing ceremony, Dare, congratulated Rivers Angels for their triumph and tasked them to be worthy ambassadors of the country in the maiden edition of the women’s continental football showpiece.

“I want to congratulate the overall winner and those who will represent us for the first time in the female CAF Champions League to be our worthy representatives by perhaps winning the maiden trophy.

“Don’t forget we have a track record in female football in Africa where we remain a dominant force. We can extend the dominance from the national team to club level.”