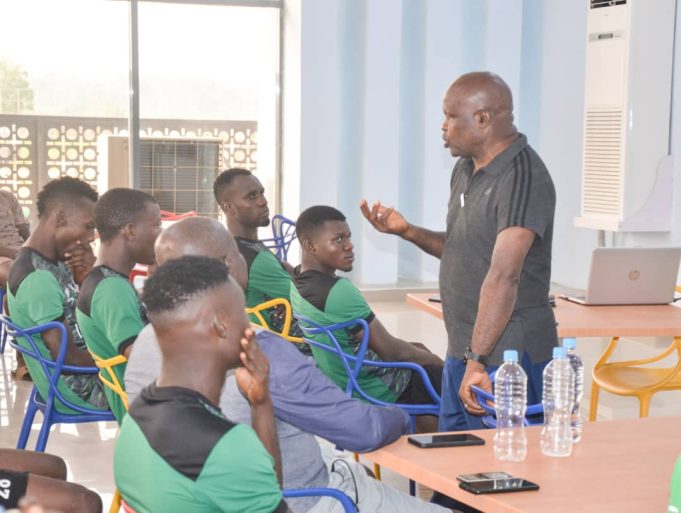 Ahead of the upcoming 2021/2022 Nigeria Professional Football League (NPFL) season, Remo Stars Football Club (RSFC) on Friday held a seminar on the new laws of the game.

The meeting which was held at the Remo Stars Stadium, Ikenne-Remo, Ogun State had in attendance the players and the officials of the club as they were taken through the course by former match Referee, who is presently FIFA and CAF Instructor in Nigeria, Calistus Chukwujekwu.

Chukwujekwu disclosed that the seminar is important for the players, officials and management of the club to guide their conducts in the upcoming 2021/2020 football season.

He noted that “referees are very important in football because without them there cannot be any successful football match, it is therefore important for the players and officials to understand the very rules guiding the activities of the referees in football matches.”

In a chat with RSFC Media, the retired match arbiter Chukwujekwu noted that the conduct of the players showed that there were grey areas where they enlightenment and it served as an opportunity to reveal the new aspects that have been included in the laws of the game.

“The questions the players asked were practical questions they have faced in various games across all competitions, they were answered and it became very clear to them why some decisions were taken by some referees.”

“They have been educated the more about the lastest inclusions in the law of the game. The laws change from time to time and a good example is the law of handball.”

“I am so sure everyone of them have gained from the seminar, the technical crew would also have gained but the only thing left is for everybody to put it into practice at every point in time during and after each game.”

“It is a very important aspect of football, at the FIFA and CAF level, there is something called the TAM (Team Arrival Meeting).

“In every competition, there are areas the competition will want to emphasize on and they will go ahead to tell teams that this is what the referees will want to do and instructors are called to give them this information.”

“I must commend Remo Stars for this seminar, they have taken the right step and I feel every club should take this bold step in educating the players and the officials before the commencement of the 2021/2022 Nigeria Professional League season.”

Captain of Remo Stars, Nduka Junior appreciated the Resource person and the management of the club for putting up such an important seminar before the new season and promised that the players would follow them appropriately.