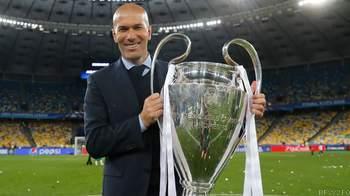 Zinedine Zidane said Saturday that his players will not be given any holiday after La Liga ends this weekend as Real Madrid turn their attention to their crunch Champions League tie with Manchester City.

Madrid have won La Liga with a game to spare and could rest players for Sunday’s final game away to relegation battlers Leganes.

But Zidane insists there will be no let-up from Monday as Madrid attempt to overturn a 2-1 home defeat to City in the second leg of the last 16 encounter.

“They are not going to have two weeks off,” said Zidane in a press conference on Saturday. “We have a game tomorrow and then we are not on vacation. Let’s get some rest, but then our minds will be on City.

“The season is not over. We’re going to have a few days off but everyone will be focused on what is a crucial match.”

Madrid sit seven points clear of Barcelona at the top of La Liga after securing only their third league title in 12 years.

Their success comes after a 10-match winning run since the restart, with the team finding their best form after the three-month suspension due to the coronavirus pandemic.

“The title should never be under-estimated, especially this one. It has been difficult and we have fought to the end,” Zidane said.

Madrid’s line-up and focus could be crucial to La Liga’s survival race given Leganes are fighting Celta Vigo to avoid the drop. Leganes are a point behind Celta, who play away at bottom club Espanyol.

“We can’t play it differently,” said Zidane. “One match is left, we must respect that. It is the last game and we have to respect everyone else. We will play it to try to do well.”