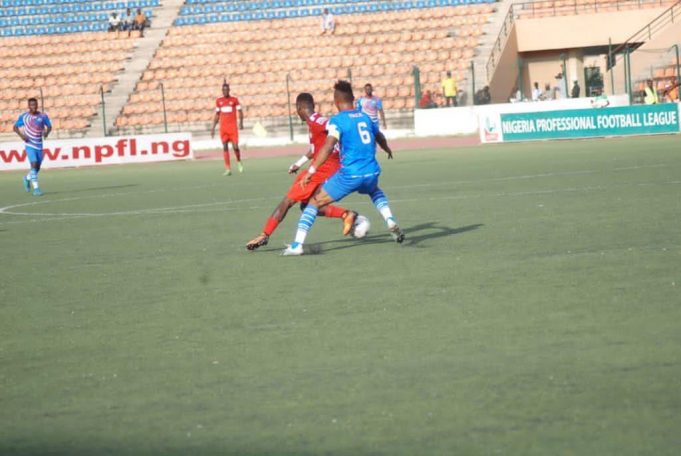 When a person is named “Promise”, so much would be expected of that individual in any aspect of life he is involved in.

The question would always be, “Can he fulfill the promise(s) his name suggest?!”, that, is the case of professional footballer, Promise Damala.

Promise plies his trade with Nigeria Professional Football League, NPFL side, Wikki Tourist of Bauchi having arrived at the club in 2019.

One of the best Under 20 players in the land, he scored four goals and assisted three last season and since then, he has never looked back but kicked on from where he stopped into the 2020/21 season.

Coming into the new season, Promise Damala was tipped as one of the players to look forward to and duly repaid that faith and hype when he scored the fastest goal in the league inside five minutes against Nasarawa Utd in Lafia.

Since then, he has scored three goals, the other two against Jigawa Golden Stars and MFM FC of Lagos whilst recording one assist already.

Speaking of his goal against Jigawa Golden Stars, in a match that was beamed on TV. Promise took his opportunity and scored an absolute screamer of a goal, which forced the matchday commentator to say the goal made him “shiver”

That’s the sort of quality you get from Promise Damala on match days in the NPFL, if he is not scoring or assisting, Promise is bombing down the wings and delivery some assuring displays.

At only 19, Promise is arguably one of the most interesting attackers in the NPFL. A speedy, skillful youngster with a bright future.

He is one of the few players to have scored at least a goal in the league in the last three consecutive seasons.

A mainstay for Usman Abd’Allah side having racked in over 700mins of league action this season and while Wikki Tourist were winless in their first three games of the season, Damala was one of the few players who could raise their heads up and say “we gave our best”.

Bauchi football lovers are always delighted to see him on the team sheet for every of their games and that is because they know that, with Promise in the team, they stand a better chance of winning a game.

Sources confirmed that Promise Damala is being looked at by more than three NPFL teams for a possible transfer. Guess what, the league is only nine weeks old and Damala is already being scouted. That’s what quality brings.

While Promise Damala is an exciting talent, at 19, he sure knows that there is room for improvement in his all round game play and decision making.