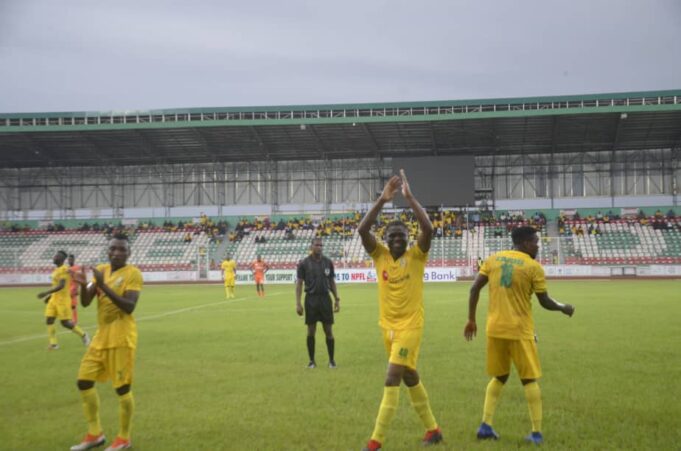 The 1973 Nigerian league champions ended their journey in the NNL with a slim victory against a well-anchored Vandrezzer FC to end their successful and productive Nigeria National League season.

Shaibu has been a Bendel Insurance player since 2016, contributing to the team’s promotion in the 2018/2019 season and staying to playing with the team since they went back to relegation.

Like the great Gianluigi Buffon, Pavel Nedved, Giorgio Chiellini, Mauro Camoranesi, Alessandro Del Piero and David Trezeguet who all stayed with Juventus – who went on relegation in the 2006/2007 season, Philip Shaibu registered for 2021/2022 NNL season to keep his playing status – though he could only play the first thirty minutes of the last game of the season in a glamorous fashion – his dressing room support is a huge factor in the 1973 Nigeria Football League winners.

In celebrating his retirement, Philip Shaibu celebrated his retirement from active football with forty quality balls shared with the fans, throwing the atmosphere into a frenzy scene as the excited fans registered their merry mind.

At the post-match, Philip Shaibu recounted how the journey was back to the NPFL, and appreciated the governor of Edo State, Mr Godwin Obaseki for his immense support, and the management of the NNL for standing firm and staying focused on the assignment given to them.

“Today, we thank God that we are in the NPFL and we want to thank the coach – Monday Odigie and the players”

“I never settled for the less because I know that we can do better. The Edo State government is not in sports to make money, but we are in sports to change the narrative. We started with the facilities facelift and we shifted attention to building capacity.”

“Many had doubted us that we couldn’t sustain what we started, but so far, we have disappointed them and we will keep doing that as we belong to the league of the best.”

“We belong to NPFL and that’s where we will be, we will do everything to make sure that the momentum is sustained.”

“I’m leaving without injury and we won our last match, I’m happy for that.”

The former Water Cooperation FC of Akure midfielder pleaded with the Nigeria Football Federation and the Ministry of Sports to help the NNL in becoming the real engine room of the Nigerian men’s football league.

“The only way the NNL can be strong and be the engine room of Nigerian football is if the NFF and the ministry of youths and sports put their eyes down and do all to support them in gaining sponsorship so that there won’t be issues of owing referees their entitlement; but for us, we will continue to support the NNL in our best capacity.”

“The next target is continental for the team now and we will continue to support the team to achieve that.”

“To our sponsors – Sterling Bank, we want to thank you for trusting in our team and we both have achieved the aim – we have achieved our target and we hope they will now fulfil their promise of tripling the contract we signed last time.”

Shaibu ended his speech by stating the different teams he played for actively.

” For record purpose, aside from playing for UNIJOS school team in my tertiary institution days, I played at the NISFON U-20 tournament where we got to the quarter-finals, I played for the Foreign Affairs FC, the defunct Water Cooperation FC renamed to Ijesha United of Akure and Nigeria Prison Service FC.

Ogun state U13, U15 tournament kicks off on December one