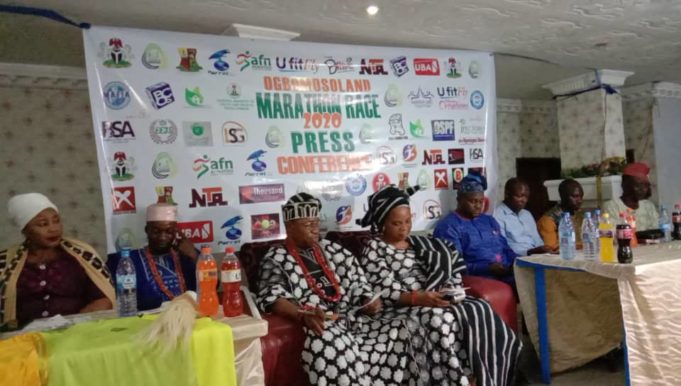 About one thousand, one hundred and forty athletes across the local governments and local council development areas in Ogbomoso zone have registered for the maiden edition of Ogbomosoland marathon race coming up on Saturday 28th of November,2020.

Speaking at the press conference of the marathon which held on Thursday at the Living Soul Garden Hotel in Ogbomoso,the Chairman of the organising committee ,Prince Oyebamiji Aderemi Joy said all is now set for the race to hold as scheduled.

Oyebamiji, who explained that the registration for the marathon which will be flagged off by the Honourable Minister of Youth and Sports development,Mr Sunday Dare has been free as it aims to discover hidden talents  and also promote physical and wellbeing of the people.

The Chairman who thanked all the stakeholders and Honourable Minister of Youth and Sports Development for their support towards organising the first of its kind event revealed that the 10km race which has been billed for 7am on the said date will start  at the Ogbomoso High School and end at Soun Ogunlola Stadium.

Noting some of the rewards for outstanding athletes, he said that Fifty thousands, forty thousands,
thirty thousands, twenty thousands and ten thousands naira with medals and certificates have been set aside for the first to fifth winner of the marathon while sixth to tenth winner will take home material prizes with all the participants also entitle to a certificate each.

“Through our medical partners who will also be using their hospitals as referral centres,we have been able to make provision for 25 medical personnels that will be on ground on the day, Eight  ambulances, Two oxygen tanks,first aid boxes and also with the addition of Red cross officials” the chairman added.

Emphasising the resolve of the committee to deliver a race of international repute, he disclosed that the disbursement of bibs and medical test for all the registered athletes will hold from 26th to 28th of November at Osupa Day School in Ogbomoso as the central location with all other local government and council areas excercise billed for their respective secretariats.

He assured the general public of adequate security  before, during and after the marathon in view of the collaboration with all the security agencies.

His Royal Majesty, Oba Thompson Adeyeye Oyetunji, the Alajaawa Of Ajaawa land in his remarks commended the organiser of the marathon for initiating what he describe as a platform that will enhance youth productivity as he charge the government to prioritize the provision of sports facilities across the zone in a bid to aid sport development.

Olowode of Owode,Oba Areo John Akinkunmi and Elder Oyewale Gbemisoye who represented the Ogbomoso Sons and Daughters in North America in their separate speech urge the organizer not to relent on their oars as they have set out the pace for others to follow.

The Director of Education and Social services of Ogbomoso South local government, Mr Imosan M. A who spoke on behalf of all the local government officials at the event assured the committee of their unalloyed support towards the success of the marathon.

The representative of the National Drug Law and Enforcement Agency,NDLEA, Mr Wokoma Terry A. in his words cautioned all the participants not to use any performance enhancement drugs adding that whoever found guilty of such act will be dealt with accordingly.

Dr. Paul Ajagbe , the Chief Medical Director of Emmanuel Medical Centre and the Head of the marathon medical team admonished  all the participants no to see the race as a do or die affair saying that it’s an opportunity for them to raise their level of wellness and aid their agility.

CRC J.K Adejokun of the Federal Road Safety Corps, Ogbomoso Command ,M.A Tiamiyu of the Department of State Security, Ogbomoso zone and A.A Ibrahim of the Nigeria Security and Civil Defence Corps in their words said all the agencies will work together in a bid to have an hitch free marathon that will be devoid of any form of security threatening situation.

The press parley was also witnessed by partners to the marathon,youth groups,members of the Red cross society, community development officers and representatives of media organisations.

Engineer Seyi Makinde, the Executive Governor of Oyo State will be leading all other dignitaries to the event while the Soun of Ogbomoso land, Oba Jimoh Oladunni Oyewumi Ajagungbade 111, CFR alongside other traditional rulers in Ogbomoso zone would be on ground as royal fathers of the days.