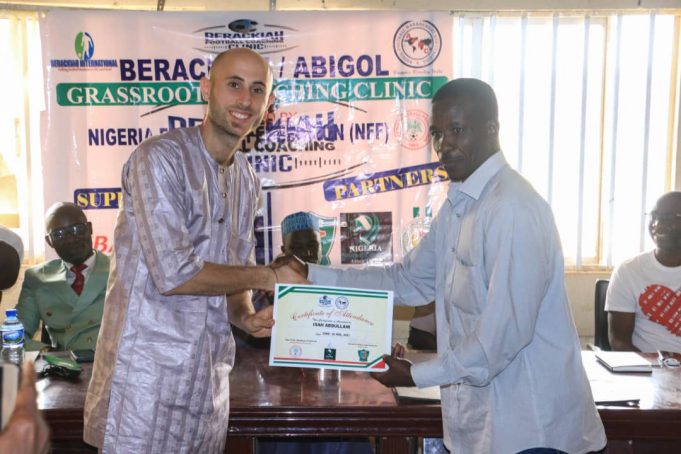 The organisers of NLO Berackiah/Abigol football coaching clinic has been urged to sustain the initiative in order to place coaching education system in the country on an enduring path.

Nazir Muhammed, the class representative of the participants of the programme made the remarks on Friday in Kaduna at the closing ceremony of the 5-days clinic which was aimed at enhancing and improving the capacity of grassroots coaches.

While describing the clinic as a welcome development, he noted that the participants were really fortunate and have enjoyed a rare opportunity and privilege by attending the programme.

“This is a welcome development and we are privileged and fortunate to be part of this project which I believe will enhance our performances.

“I thank the facilitators of this project and I want to urge them to continue, because what we lack in this country is continuity” Nazir said.

In his own remarks, the President of Nigeria Football Coaches Association (NFCA) Ladan Bosso charged the participants to replicate the teachings when they get back to their respective clubs.

He admonished them to exhibit positive difference in their delivery as a way of bringing about the needed wave in football development.

“This is historical for me and my board members because it is the first coaching clinic that will be happening under our administration. I am definitely going to add this to my achievements card at the end of the year.

He however appealed to the NFCA President to create opportunity for grassroots coaches as a way of eliminating weapons without purpose system.

Other guests at the event were Coach Mathew Olorunleke, a Nigerian-Italian who is also a resource person, Gian Marco Diuna, an Italian goalkeeper trainer and host of others.

A total number of 44 coaches participated in the clinic in Kaduna as the second phase of the clinic in the North West part of the country after similar programme had been done in Kano in the previous week.

The clinic having covered five geo-political zones in the country will now head to the North East in Bauchi State and run from Monday, March 1st – 5th of March.