The Franco-German coach was appointed in 2016 to take charge of the Super Eagles and was immediately saddled with the responsibility of qualifying the team for the 2018 world cup in Russia.

Rohr is no newcomer to African football having previously coached Gabon, Niger and Burkina Faso. Rohr ensured Nigeria qualified for the 2018 world cup held in Russia as the first African team on 7 October 2017 after a 1-0 win against Zambia, from a seemingly tough group which included Cameroon and Algeria.

He also ensured Nigeria’s qualification for the 2019 Nations Cup which was later held in Egypt after missing out on two previous editions. However, issues were raised concerning his future after a group stage exit from the 2018 World Cup and a third-place finish at the Nations Cup.

As regards his new contract, Rohr will be expected to live in Nigeria, earn his salary in Naira, and alone go around the league to see how he can nurture the players. As regards his future, NFF president Amaju Pinnick was quoted by Premium Times, just before Nigeria’s third-place match against Tunisia at the Nations Cup to have said “Gernot has taken us to the semi-final, the target we set for him. Right now, we have a third-place match to play for and we intend to have our team leave Egypt with honor.

There are some people that have been calling on me and the federation to sack Rohr. But I am not going to do that. In fact, Rohr is going on a refresher training period with Bayern Munich after the Nations Cup. We have a long-term plan with him.”

Truth is, I’ve never been a fan of Rohr but he’s done a great job, took Nigeria to the Nations Cup after we failed on two occasions, a third-place finish where we could have won. However, the contract situation is one that must be carefully looked into.

We have always paid our foreign coaches in dollars, I remember Lars lager bac, Berti Vogts got huge sums but moved our football backward. It should be noted that in Rohr’s first contract, he was paid in dollars, and a change in terms of payment in a new contract shows that the services of Rohr might no longer be needed. Maybe it’s time to start paying in our own official currency which I partially agree with.

On the clause that Rohr should live in Nigeria, it’s a good one but it shouldn’t be a problem since Rohr performed to the best of his abilities without staying in the country in the first years of his contract.

Gernot Rohr as a National team coach should not be restricted to three travels in a year when we don’t even play up to 10 games in a year except when we have tournaments. What if there are emergencies? Or he needs to leave for personal reasons? This might also be an indication that his services are no longer needed.

The icing on the cake that shows it’s time for Rohr to leave, and the Amaju led NFF are not just coming out plain is that Rohr must alone go around the league to see how he can nurture the players.

This raises a lot of concerns and then asks the salient question, What is the function of the League management company (LMC)? when did it become the responsibility of a national team coach to develop a country’s league and nurture players? It’s more like saying Roberto Mancini should develop Italian players in the Italian Serie A or Gareth Southgate should develop English players in the English premier league, these are two different entities.

There are important things that the NFF is missing out and it’s more like neglecting its duties. It should charge the Sheu Dikko led LMC to ensure that the league is televised. It should be recalled that in November 2019, the LMC signed a multi-million dollar broadcast television deal with Next Digital Television, but the leopard of the league has not changed its spots. Hardly do Nigerians get to watch home-based players, how then show we trust them over players we watch play for their respective clubs week in, week out?

The terms of the new contract for Gernot Rohr are just too crude to be agreed to. Well, I’m not Gernot Rohr, nor his lawyers, but if the services of Rohr is no longer needed, NFF should pay him off rather than Dilly dallying. 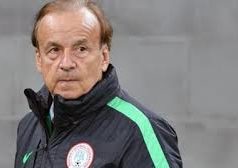