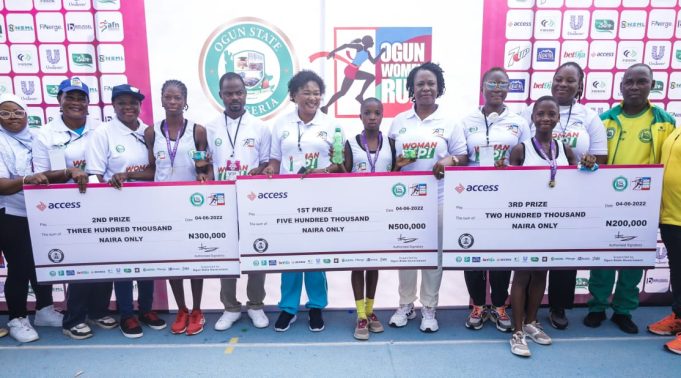 Olude Kehinde Ajoke was the first to get to the finish line, thereby emerged champion at the first ever Ogun Women Run, 5 kilometre road race, put together by Brussels Sport Limited.

In a first of its kind race, specifically designed for Women in the Gateway state, Ajoke emerged victorious after just twenty minutes and four seconds (20:04) to clinch the grand prize of five hundred thousand naira only.

Ephraim Yemisi was the second fastest to get to the finish line after twenty minutes and forty nine seconds (20:49), she was presented with a three hundred thousand naira cheque.

In a contest that began at First Bank, Sapon, Abeokuta and terminated at the MKO Abiola International Stadium, Asekun Olayemi also finished on the podium as the second runner up, she got to the finish line after racing for twenty one minutes and seven seconds (21:07), her effort was enough to earn her the two hundred thousand naira prize money for the third position.

At the end of the race which had over a thousand runners, the wife of the executive governor of Ogun State, Mrs. Bamidele Abiodun congratulated the organizers for a job well done and gave kudos to them for prioritizing Ogun State Women.

Represented by the wife of the speaker, Ogun State House of Assembly, Mrs. Victoria Oluomo, the governor’s spouse in her address said “I congratulate all those who took part in this first edition of the Ogun Women Run, everyone here is a winner, for showing up and putting your health and well-being first, I know we can do even better next time”

“Thank you to the organizer, Mr Seyi Johnson for putting this together, it’s our believe that this is just the beginning, I assure you that we will do more in the next edition, congratulations”.

Mrs Bamidele Abiodun was joined on the podium by the commissioner for youth and sports in the state, Dr. Kehinde Oluwadare, to present medals and cheque to the winners.

“Despite the successes recorded by the whole team, I will say we want to do better in the next edition, we are looking at making it an international race as well, it’s really good that we were able to achieve this”

Mr. Seyi Johnson appreciated the executive governor of Ogun State, Prince Dr. Dapo Abiodun for creating the enabling environment, he also appreciated the wife of the governor for her tremendous support, the Brussels sport managing director also paid glowing tributes to all sponsors.

Also present at the event were the permanent secretary, ministry of youth and sports, Engr. Olayiwola Abiodun, Special assistant to the governor on youth, Mr. Lamide lawal, his Job Creation counterpart, Mr. Abiola Odetola, Director of sports in the state, Mrs. Iyabo Rotimi, former director of sports in the state, Prince Tunji Onatolu, members of the fourth estate of the realm, and people from different walks of life