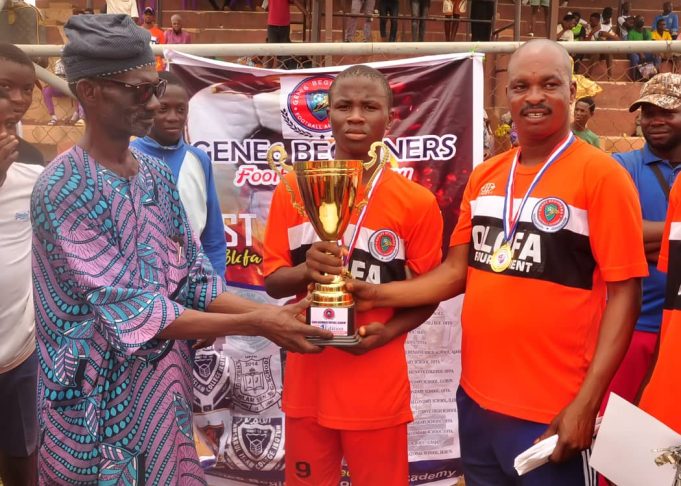 Offa Grammar School have emerged champions of the maiden Olofa football tournament after they recorded a 2-0 Victory over Ansarul Islam College Offa in the final played at the Offa Township
Kwara State.

An end to end stuff it was as both teams came out with lots of motivation and determination with the top crown in sights as they went toe to toe, but it was Offa Grammar School who got the lead courtesy of a half strike volley from their No.7 seven jersey player, Kolawole Samad few minutes before the break.

Ansar-ul Islam came out searching for an equalizer in the second half mounting pressure on Offa Grammar School defense but couldn’t penetrate as the men on orange jersey held on and later put the icing on the cake with their second goal through Mathew Tayo from a lovely counter attacking play.

Two nil it ended at the blast of the final whistle to claim the top prize of the maiden competition which began on the 6th of March 2022 with 16 teams in participation.

In the third place match played earlier, ECWA Secondary School Igbaja defeated Ira Grammar School one nil to claim bronze with substitute Kastina Habakkuk being the hero of the day as his second half header gifted ECWA the victory.