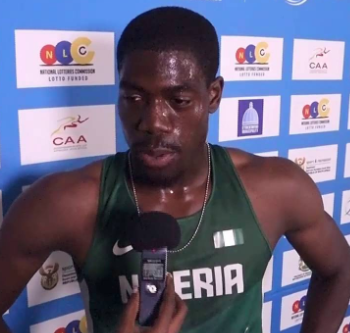 Nigeria’s Chidi Okezie failed to advance to the final of the men’s 400 metres event on Friday at the 2018 IAAF World Indoor Championships in Birmingham, United Kingdom.

The final is slated for Saturday evening, but Okezie could not go beyond the semi-final after finishing fifth in heat 3 with a time of 48.53 seconds.

The 24-year-old, with a season best 46.58 and personal best 46.48, ran from lane two but he could not reproduce his pre-competition form.

In the women’s event, his compatriot Patience Okon-George had earlier in the day crashed out after failing to start the race.

The News Agency of Nigeria (NAN) reports that the championships which got underway on Thursday will end on Sunday.