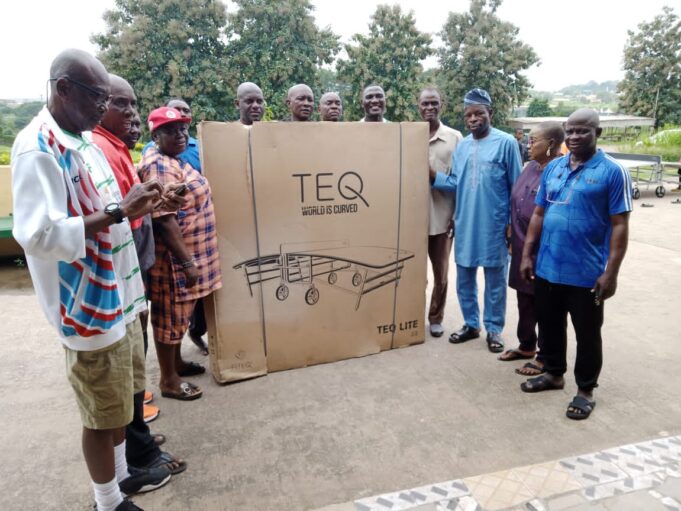 The Chairman of Nigeria Teqball Association,Ogun State Chapter Alhaji Waheed Adeoye Lawal has handed over a set of table for the game to the State Sports Council’s boss,Mrs Folakemi Iyabode Rotimi

The brief handover ceremony was held on Saturday at the Association’s Secretariat located inside the MKO Abiola Stadium,Abeokuta

In a remark after receiving the table,the Director of Sports,Mrs Rotimi thanked the Teqball Chairman and noted that the game’s Association’s Board should have been inaugurated with the other various Sports’ boards that were sworn in recently but due to some operational exigencies,she however assured that the Teqball Association,Ogun State Chapter would be constituted very soon

Speaking after the handover,the Ogun State Teqball Association’s Chairman who is also the President of All Stars Football Club,Abeokuta and the Grand Patron of the state chapter of Athletics Federation of Nigeria,disclosed that Ogun State was one of the pivot states in the country that was privilege to receive two tables among the total fifty-six tables that were distributed to various state Associations earlier in the year by the Teqball Federation of Nigeria.

Lawal assured that the State’s Teqball Association would hit the ground running as soon as the board is constituted by the Sports CouncilAlso present at the presentation was the Elders Council of the All Stars Football Club,Abeokuta led by ex-Coach of the State-owned football team,Gateway United FC,Coach Kola Taiwo and some executive members of the Club

Teqball originated from Hungary. It is a mixture of Table tennis and Football and it is played with all parts of the body except the hands.There are more than a hundred Teqball Associations around the world. Teqball has held three world cup tournaments and has its eyes set on becoming an Olympics Sport in 2028 LA OlympicsDouble A Global Sports

Ezenwa speaks on being invited for Super Eagles’ friendlies against Poland,...