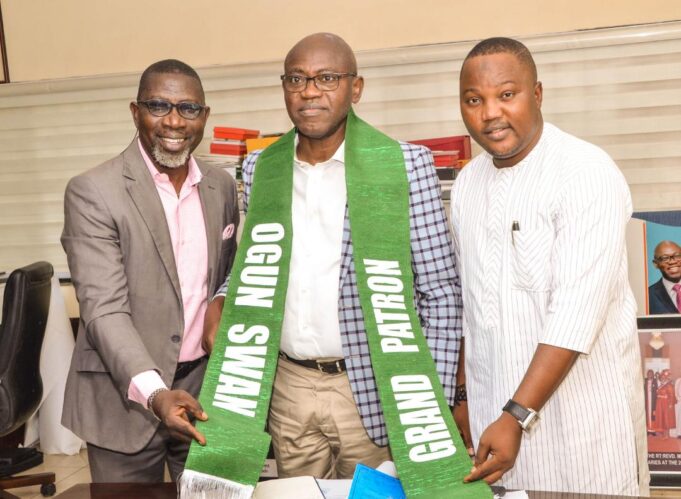 According to the SWAN Chairman in the state, Hakeem Akintunde the Governor’s decoration was in line with the Article 18, Section f (ii) of the SWAN Statues.

Akintunde added that, the decoration of Gov. Abiodun as SWAN Grand Patron was also in appreciation for bringing Ogun State to the world stage through his unquantifiable support to World athletics champion, Oluwatobiloba Amusan.

He emphasized that, Amusan’s exploits in Oregon, United States of America (USA) and the just concluded Commonwealth Games in Birmingham, United Kingdom would not have been possible without the Governor’s tenacity and financial investment in the Odogbolu-born athlete.

He added that, the inauguration of Governor Abiodun as Grand Patron was specifically designed to herald two years in office of the current executives and also to present to the Governor the association’s blueprint on sports development to guide him on his manifesto for second term in office in the area of sports.

The SWAN Chairman commended Governor Abiodun for approving the constitution of Board members into the 36 Sports Associations in the state.

The Sports Writers equally presented sports blueprint to the state government aimed at overhauling the sports industry in the state.

Responding, Governor Dapo Abiodun commended SWAN for contributing to the growth and advancement of the state through objective reportage of sporting activities in the state.

Abiodun noted that sports writers are critical stakeholders who have continued to uphold the tenets and ethics of the profession, he assured that the state government is aware of the necessity in the sports sector, adding that his administration will ensure that ideas that will drive the sector will continue to be implemented.

The governor, who was represented by the Secretary to the State Government (SSG), Mr. Tokunbo Talabi, said a collaboration with Ogun SWAN and other stakeholders is essential, as it will in no small measure help in galvanizing and actualizing the dream of every sports lover and enthusiast in the Gateway state.

The governor said plans were underway to reposition sporting activities and sports administration in the state while assuring the Sports Writers Association of Nigeria of a robust support and intervention towards improving sports journalism in the State.

The Governor also promised that the blueprint submitted by SWAN, would be looked into for necessary review and implementation while noting that his administration would further improve on the recent rehabilitation works carried out at the M.K.O Abiola Stadium through a public-private partnership.

Made in Chelsea : Frank Lampard’s faith sees academy graduates flourish on the big...

Over 300 athletes to participate in Ogun State Mind Games festival