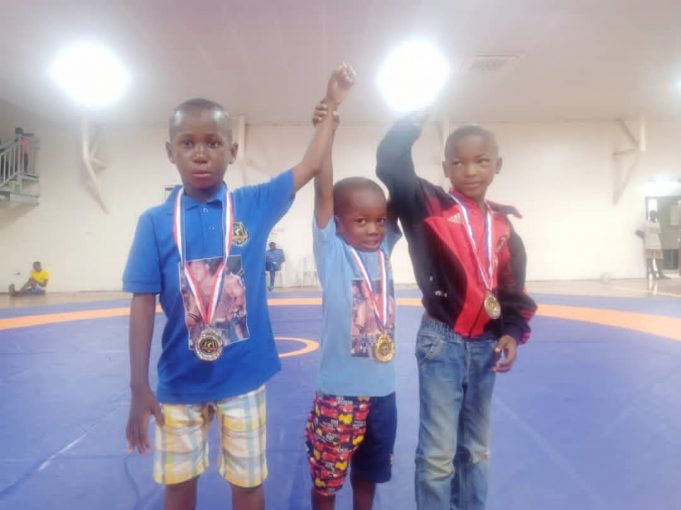 Weeks after the second round of Morris Atula Face of Wrestling Audition’ saw five out of ten strong, resilient, tenacious and technically gifted cadet wrestles in Edo state advanced to the final stage of the audition, Osaretin Ogiemwonyi has emerged as the last man standing and the winner of the maiden career building audition put up by Chairman, Edo State Wrestling Association, Morris Atula

The audition that proceeds the “Morris Atula Cadet Championship, which took place in Benin City, the first of its kind with wrestlers across the 18 local government of the state involved and young kids displayed their skills in the game, has seen thorough steps and measures taken by the audition panels to know to come to the final decision.

Recall, Over 50 cadets wrestlers participated in the championship with some of them carting home gold, silvers, bronzes and cash prize rewards in a frenzy gathering at the Ogbemudia Stadium.

In order to continually enhance the cadets’ abilities and discover future stars for the state and the country at large, Morris Atula, after the championship launched an audition to pick the best wrestler, who will be on academic scholarship and tour to the United Kingdom, from amongst selected 10 wrestlers.

The final five were however subjected to series of screening which lasted over 4 weeks. Screening processes include trainings, tune up fights, fitness, relationship with other athletes and other technical yardsticks used by the screening panel led by the Edo State Wrestling Association chief Coach, Victor Oriakhi.

From the various screening procedures, a 4-year-old Ogiemwonyi Osaretin on Friday, 8th October, 2021, emerged the eventual winner of the Morris Atula Face of Wrestling in Edo State.

According to the head coach of the Edo State Wrestling Association, Victor Oriakhi, it took the panel careful assessment, observation of wrestlers amidst days of loss of sleep for days to arrive at the eventual winner.

“We know this is a huge task bestowed on us by the chairman and we had to do it with all sincerity, reason why it took this long to arrive at the eventual winner. We took our time to study these cadets and consider their consistency during these long weeks.”

“Since July, we have selected 10 from over fifty who participated in the championship, trimmed them down to five and being fully aware of what’s at stake and considering the future of the wrestlers, Osaretin is generally selected by all members of the panel.”

“Osaretin is a kid, and picking him up from this stage is the best thing and best way of building future wrestlers like the chairman himself, Daniel Igali, Blessing Oborodudu, Odunayo Adekuoroye and the likes. The future is part of what we consider and besides, his skills, determination in fight are what need proper development.”

“Once again, I want to say a big thanks to Morris Atula for this wonderful program, first of its kind in the state. I want to assure him that Osaretin is picked on careful assessment, without favour or sentiment from the screening panel. Surely, we have a new Morris Atula born today.”

Morris Atula is a former world middleweight champion and one of the pioneers in the country’s professional wrestling.