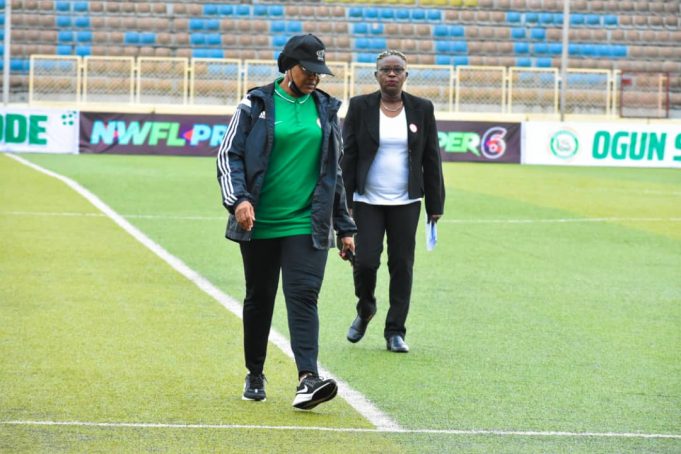 Former Chief Executive Officer of the Nigeria National League NNL, Honourable Bukola Olopade has given kudos to the Nigeria Football Federation and the leadership of the Nigeria Women Football League on the tremendous success recorded at the just concluded NWFL Super six in Ijebu Ode.

Bearing his mind on the tournament where Rivers Angels emerged overall Champions at the Dipo Dina stadium, Ijebu Ode, Olopade acknowledged the immense contribution of the NFF President Amaju Pinnick and the Chairperson of the Women’s League, Aisha Falode to the development of female football in the country and harped on the need for people to always give credit as and when due.

The sports administrator said the Dipo Dina stadium has maintained its standard, since meeting the requirements of the World Football governing body FIFA in 2009 when it hosted games during the FIFA Under 17 World Cup which the country hosted.

“Honestly, the leadership of the NWFL has done a tremendous job, the Super six has come and gone, but what they have achieved will be on the forefront for so many years, congratulations to Madam Aisha Falode and plaudits must go to my good friend Amaju Pinnick as well”

“The decision to adopt this format paved way for a hitch free conclusion, I’m extremely proud of the NFF and all stakeholders involved in putting this beauty together”.

Bringing the edifice put into use to the front burner, the former sports commissioner in Ogun state affirmed that the Dipo Dina stadium is class above others considering the facilities in the premises and what was involved in putting it to shape.

“Without being arrogant I’m always proud to say I served during the tenure of Otunba Gbenga Daniel which scored points in sports development, and one of the things we did was putting this infrastructure in place”.

“Thankfully, the governor Dapo Abiodun led government is keying into that idea by giving the stadium a facelift and attracting events to keep the magnificent edifice busy”.

Hon Olopade congratulated Rivers Angels for playing good football and emerging champions, he also gave thumbs up to other participating teams, describing them as agents of progress and football development.