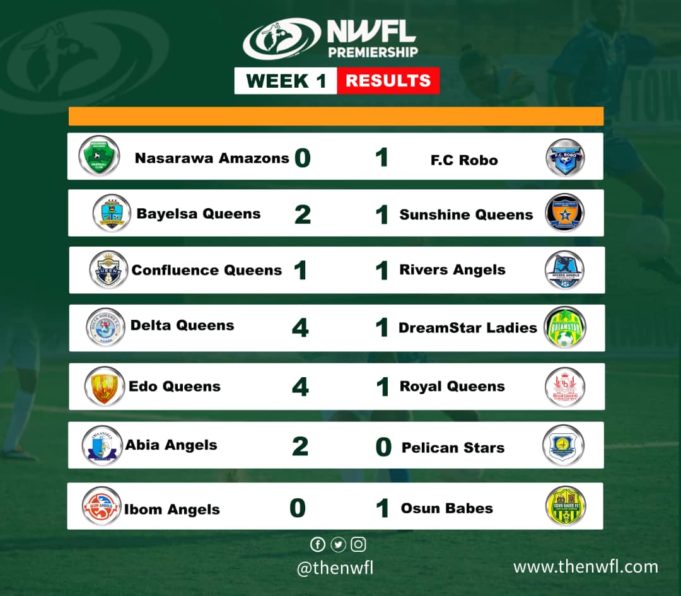 The 2021 NWFL Premiership got underway on wednesday with the match-day one fixtures played across seven centres in the country which created some thrilling moments in the Nigeria Women Football top-tier.

The first match of the new season recorded 19 goals, two away victories, a draw and four home wins.

Nasarawa Amazons on Wednesday lost their second consecutive league opener at home. In 2019, the “Solid Babes” lost their first game at home to Bayelsa Queens with Anjor Mary scoring a brace in that encounter.

The home team created alot of goal scoring chances in the first half, but failed to convert them, however they were punished in the 32nd minute through FC Robo’s young forward Shobowale Rukayat.

Osun Babes started the season in an impressive fashion with a win at the Godswill Akpabio Stadium, Uyo. The opening half hour left much to be desired as both teams struggled to make strings of successful passes, but Osun Babes woke up after the mark. Yetunde Fajobi sent in a low cross that was met by Yemisi Samuel and the forward wasted no time in converting coolly to give the Omoluabi Queens an away victory.

Bayelsa Queens Captain Joy Jerry started the season with aplomb as she led the Restoration Ladies to a 2-1 win over strong opponent Sunshine Queens FC.

Precious Vincent who just joined from Sunshine Queens scored the second goal in the 27th minute, while Seun Fakunle reduced the deficit in the 41st minute.

Edo Queens enjoyed total control over their opponents from the blast of the whistle. It was a comfortable win for the Rollandson Odeh girls as they romped over their neighbours Royal Queens by 4-1. Tessy Biahwo scored twice for the “Obaseki Girls” while Taibat Odueke also got her name on the scoring list.

The hosts played a good game, regularly threatening Ibubeleye Whyte in the first ten minutes of the game and got rewarded in the 7th minute through Glory Edet, but Regina Otu got Rivers Angels levelled in the 14th minute to make it 1-1.

Abia Angels played an impressive attacking game against Pelican Stars at the Umuahia Township Stadium on Wednesday evening. Margeret Ademulegun’s sublime free-kick in the 15th minute handed the ‘Angels from the East’ a lead before Jane Abraham doubled in the 47th minute to give the host a 2-0 victory over the Ayade Ladies.

Delta Queens started off the 2021 campaign with a big win over Lagos based team DreamStar Ladies in Agbor. Former Jokodolu Babes forward Dominance Odubanjo scored a brace, while Iyasere Gift and Agbonu Aghogho netted to make it four, before Bankole Sofiat scored a consolation goal in the 77th minute.

‘I want to retire at Real Madrid’ – Ramos