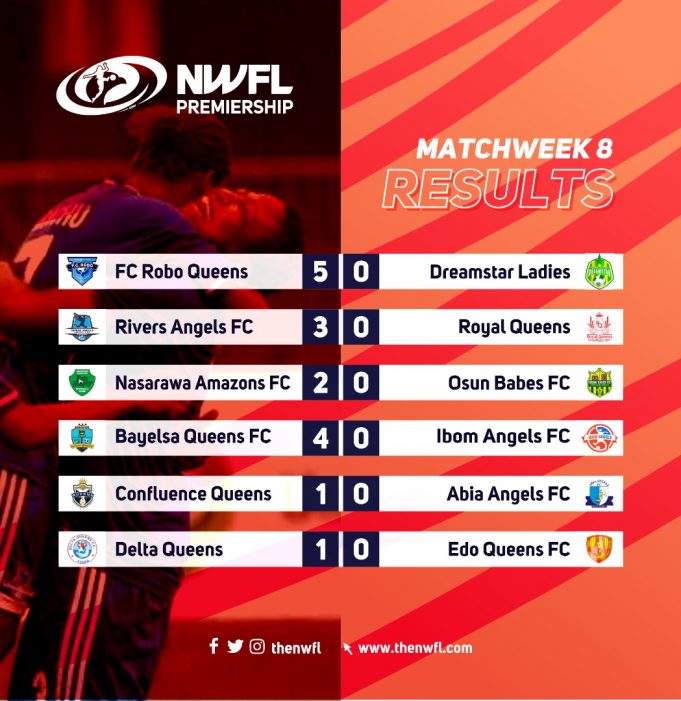 Bayelsa Queens of Yenagoa put on their best performance of the season so far in the Nigerian Women Football League matchday Eight encounter at the Dan Ayiam Stadium, Owerri by outclassing Ibom Angels of Uyo by Four goals to nil.

Playing a home game away from their traditional Samson Siasia Stadium in Yenagoa, due to the one match banishment by the Women League Board, the Gloryland Girls made good used of the opportunity to record their biggest win so far.

The game kicked off on a past pace with back from injury striker Anjor Mary tapping into an empty net after Precious Vincent layed her up in the 12th minutes. Joy Bokiri doubled the advantage for her side when she rounded up the Goalkeeper of Ibom Angels Lucky Andy on 40th minutes to end the first half with a two goals lead.

The Uyo Girls had barley settled down for the second half when Bayelsa Queens Goalkeeper Onyinyechi Okeke long kick was lashed on by Anjor Mary to score her second and Bayelsa Queens third on 47th minutes.

The Akwa Ibom Girls stated making some forays into the Bayelsa Queens box and playing some good passes when the coach made a double substitution. But any hope of a comeback was extinguished when Super Sub Charity Rueben’s 35 yards screamer caught Goalkeeper Lucky Andy napping in the 82nd minutes to end the game as a contest.

Technical Adviser of Bayelsa Queens FC Moses Aduku was elated that her girls used the banishment to make a statement of intent by scoring four beautiful goals and said that the target is to win the league this season.

Interim Coach of Ibom Angels Prince Usen was disappointed with the performance of his girls particularly in the first half and also for the below par showing of Goalkeeper Lucky Andy. But promised to beef up the team when the new management is setup probably before the second stanza of the season.

On her part, Anjor Mary was happy to be back playing and helping her team to secure this victory and remaining top of the league table. Bayelsa Queens next travels to Oshogbo to take on Osun Babes in their matchday 9.

2022 WC Q: Nigeria are our little babies but pretend to be big boys...