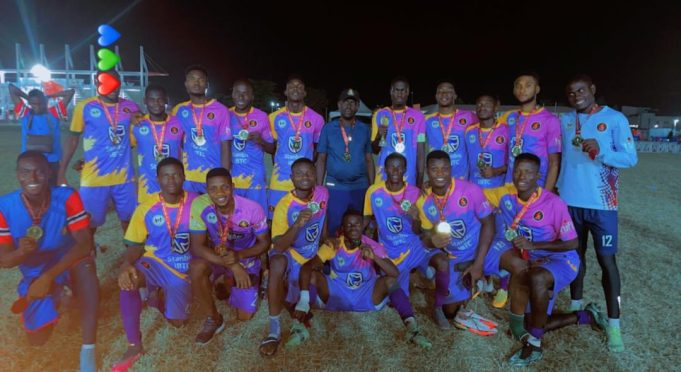 The University of Ilorin (UNILORIN) football team, on Friday, defeated the Obafemi Awolowo University (OAU) team 5-4 in a penalty shootout to emerge the champions of the 2022 Nigeria University Games (NUGA) in the men football category.

During the penalty shootout, UNILORIN lost one penalty while OAU lost two, with the last penalty kick converted to a goal by Olatunji Maleek for UNILORIN.

The Captain of UNILORIN, Sadiq Ajao, said that resilience was key for his team to winning the keenly contested match.

“It was a tough match, we wanted to play our pattern, but the OAU side having studied it stopped us from using the flanks.

“OAU is a good side with quality players, so we had to be patient to win via penalty kicks. When we lost the first penalty, we did not lose hope; anyway, penalty is a game of luck,”he said.

Distrust Captain of the OAU side, Toheeb Adegoke, said that his team did not deserve to lose the game.

“We did not deserve to lose, we played well. But in football, things like this happen, congratulations to the winners,”he said.

At the third place match played at the Yaba College of Technology (YABATECH) pitch, UNILAG Marines lost to Adamawa State University, Keffi, by a lone goal.

In the female football category, UNILAG Angels secured the much needed 3-2 win against University of Calabar to emerge the gold medalist.