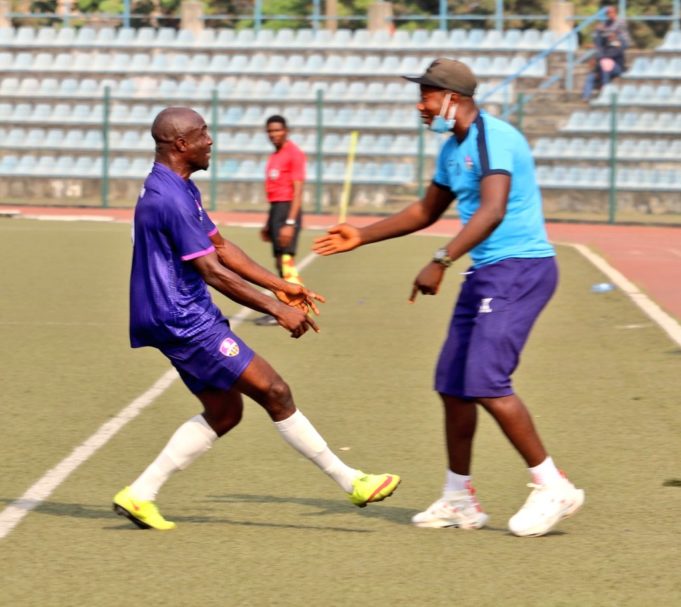 The mountain of Fire Miracles Ministry football club, striker, Odeyemi Ebenezer has revealed that he wanted to be the highest goal scorer at the end of 2020/2021 Nigeria Professional Football League(NPFL) Season.

Former Niger Tornadoes, Eyinmba, Lobi stars have a lot in their bowels so wasn’t surprised making his debut goal on Sunday for his new side against Wolves.

Ebenezer opens the goal chat for MFM in the seventh minutes on match day one of NPFL at the Agege township stadium as MFM defeats Warri Wolves 2-1.

Reacting after his first goal of the season, Ebenezer told NAIRA SPORTS that he is happy to able to record a goal at the beginning of the season.

“My target is to be the highest goalscorer this season” says Ebenezer Odeyemi. Ebenezer Odeyemi has been tagged Giroud for his ability to score goals more with head than his legs but the striker debunked it. “I beleive I can score with any part of my body” says Odeyemi.

Furthermore, the coach of MFM, Tony Bolus when asked if the new striker is the exact player they need for the team? “What we need is a striker that will be able to keep ball for us and he is doing it” says Tony Bolus.

Do you think he is the perfect replacement for Stephen Odey? The coach said time will tell.

Meanwhile the sport Director of the team told NAIRA SPORTS that Odeyemi confirmed to him to score a minimum of 15 goals this seasonbelieves believe and wishes him well.

AYFC Cup: Unity among youth is the aim of the competition – Coordinator