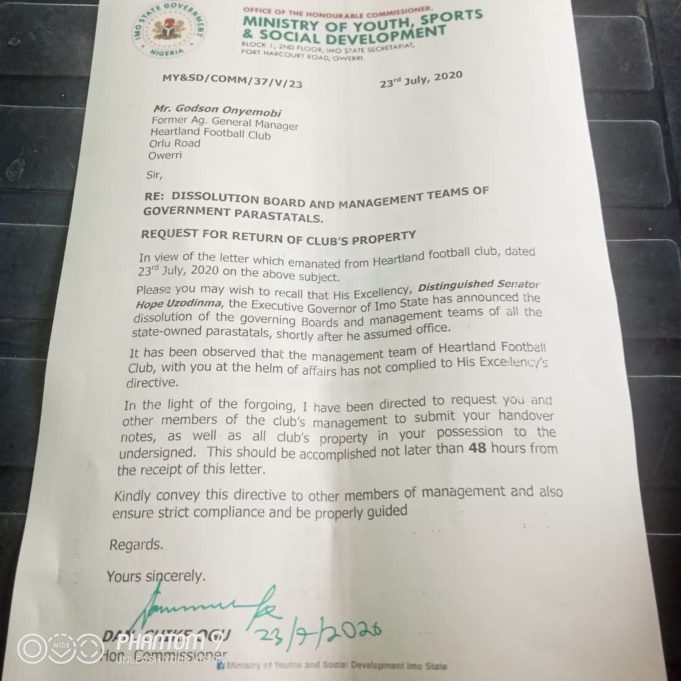 The Governor of Imo State, Senator Hope Uzodinma has dissolved the board members of the Nigeria Professional Football League club, Heartland football club.

In a letter signed by the state Commissioner for Youths, Sports and Social Development,  Daniel Oguh to the management of Heartland disclosed that the board should return all properties with 48 hours.

Heartland end the league on 13th position on the log after the cancellation of NPFL by the league Management Company with calculation of points per game.

According to the Letter, ” in view of the letter emanated from Heartland football Club, dated 23rd July, 2020 on the above subject.

“Please you may wish to recall that his excellency, Distinguished Senator Hope Uzodinma, the executive governor if imo state has announced the dissolution of the governing boards and management teams of all state-owned parastatals, shortly after he resumed office.

“It has been observed that the management team of Heartland Football club, with you at the helm of affairs has not compiled to his excellency’s directives.

“In the light of the forgoing, I have been directed to request you and other members of the club’s management to submit your hand over notes, as well as all club’s property in your possession to the undersigned. This should be accomplished not later than 48 hours from receiving this letter”.