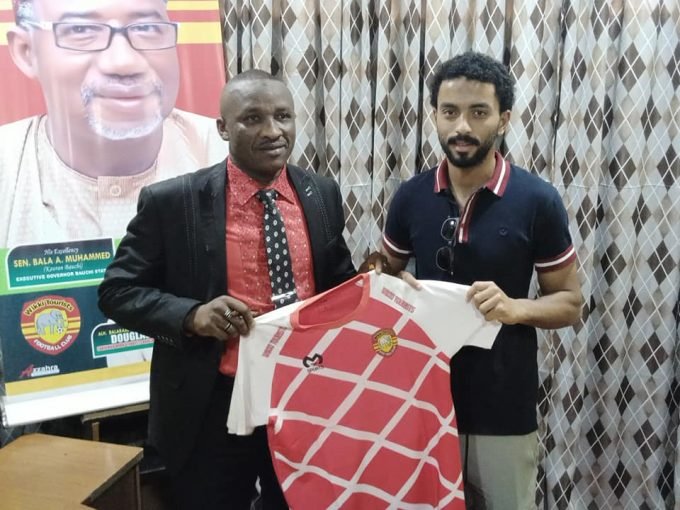 By signing for Wikki Tourists, Gamal became the first Egyptian to ever play in the Nigerian League. The club just finished the first half of the season in 13th position on the league table with 24 points from 19 games.

They are looking to strengthen their squad before the start of the second legs, and have announced their fourth signing of the transfer window in Mahmoud Gamal.

Despite being a defender, the 24-year-old was able to score eight goals with Misr Insurance last season, all of them coming from set pieces.

Wikki Tourists confirmed that Gamal will start training with the team immediately, as he has until May 9 to prepare for his potential debut against 18th-placed Katsina United.

In their official statement, the club confirmed that he will remain with the Giant Elephant until the end of the 2021/2022 season.

“Wikki Tourists fc made history today by signing an Egyptian national into the fold of it’s team from Egypt Insurance fc.

“Mahmood Gamal a left full back affends his signature on the club’s papers till end of npfl 21/22 season.

“Gamal who has been assigned number 17 Shirt is to resume training with Club immediately.

“Manager of the player, FIFA licensed football agent Mr Philip Dosu said he chose to bring Gamal to Wikki Tourists because the interest shown by the Chairman of the Club in the player assuring that Wikki Tourists will not regret signing Gamal.

“Gamal on his part promised to justify the confidence reposed in him by giving out his best to the team.

“The 24 year old Gamal who is nicked name Free kick specialist by his supporters in Egypt has scored a record eight (8) goals for his former Club last season all from free kicks,” they published on their official Facebook page.