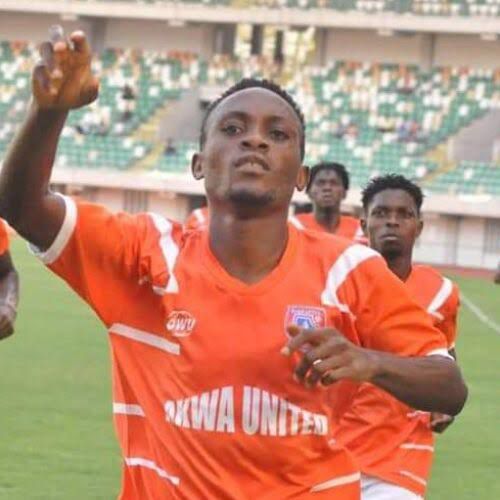 It was a reunion for Akwa United’s player Bello Babatunde at the Ondo State Sports Complex as reunites with his former side in the matchday 28 of 2021/2022 season of the Nigeria Professional Football League when Akwa United held Sunshine Stars to a goalless draw in Akure.

Babatunde put on an impressive show throughout the 90minutes of the encounter in Akure, proving his expertise once again.

His best moment of the game came in the 33rd minute when he played his trademark free-kick once again when Seth Mayi was fouled just some metres shy of the hosts’ 18-yards box but Sunshine Stars’ Goalkeeper Japheth Opubo made a brilliant save to denied the ball from entering the top corner of the goalpost.

Babatunde was happy with the outcome of encounter and expressed his excitement to be back at his former club and seeing his old teammates once more, “It’s a good one, you can see that both sides gave their best, the outcome of the game can attest to can attest to that. It is also nice to with my friends so it’s good to be back here again.” He said after match in Akure.

Reacting to Japheth Opubo’s save to deny him a wonderful goal scoring opportunity in the match, he said “That’s the logic, we were teammates for ages so he knows my weak. I tried to do my best for my team in the match and I’m glad that I did.”

Akwa United who are the defending champions in the NPFL remains seventh of the table with 41 points while Sunshine Stars moved two places up to stay eighth on the table with 38 points.

Sunshine Stars will travel to Lobi Stars in their next game of the league while Akwa United be the host when they take on Niger Tornadoes on Sunday.

World Cup Play Off: Ghana FA clashes with govt over choice of coach for...

Over 300 athletes to participate in Ogun State Mind Games festival