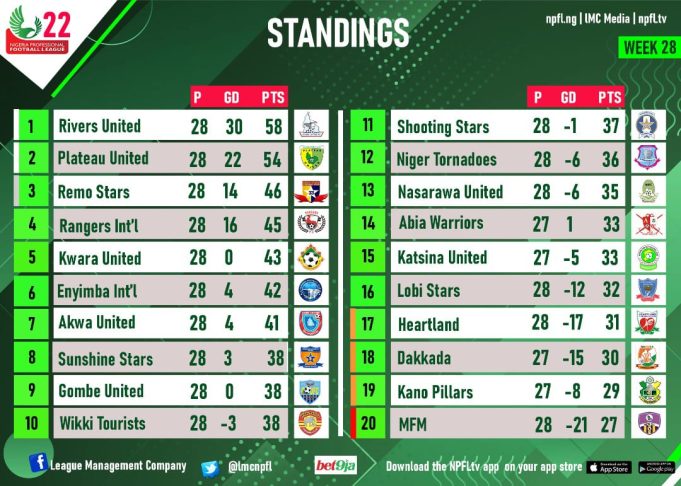 Actions continued in the 2021/2022 season of the Nigeria Professional Football League as the concluding fixtures for matchday 28, were played in various centres across the Nation.

Five home wins, a draw and a total of 13 goals were recorded during all the six matches that were played on Sunday.

In Akure, It was a reunion at the Ondo State Sports Complex as Akwa United’s coach, Ayodele Ayeni returned to his former club.

Coach Ayeni was received with applauses when he walked out to pay homage to the fans and officials of his former team.

The Owena Whales started the first ten minutes of the game on a very high note, with home team recording several attempts on goal.

Sunshine Stars were awarded a freekick in the first minute but Ozor’s effort failed to hit the target with Mutiu Dauda’s header.

The host maintained the tempo of the match as they tried to break the deadlock once again with another header from Kolade Adeniji but Akwa United’s goalkeeper Adeyinka was forced to push the ball out of danger zone to a corner kick.

Moment later, Adeyinka made a mark once again as he blocked Kolade Adeniji’s cross. Another effort by the host to find the back of the net was shattered after Dauda Mutiu’s freekick hit woodwork in the 29th minute.

Akwa United closest opportunity came in the 33rd minute when Bello Babatunde tried his trademark freekick once again but Sunshine Stars’ Goalkeeper Japheth Opubo made a brilliant save to denied the ball from entering the top corner of the goalpost. Both teams failed to break the deadlock as the first half ended goalless.

The struggle for goal continued in the second half of the game. Super Eagles invitee, goalkeeper Adeyinka Adewale once again answered the call when he was needed for Akwa United when he denied Ejike Uzoechi’s effort to put Sunshine Stars ahead 62nd minute.

The encounter ended in a stalemate in Akure as Akwa United’s defender Samson Gbadebo being solid in the helm of defense.

Akwa United who are the defending champions in the NPFL remains seventh of the table with 41 points while Sunshine Stars moved two places up to stay eighth on the table with 38 points.

Meanwhile in Ikenne, It was important match for both Remo Stars and Rangers International, both teams who occupies third and fourth positions respectively on the NPFL table before the game.

Another opportunity came in the 15th minute for the home team to find the back of the net once again but the shot from Dayo Ojo’s pass to Isah Alli was deflected by the visitors’ player.

The deadlock was broken in the 40-minute as Sikiru Alimi headed into the net Stanley Okorom’s brilliant cross to give Remo Stars the lead.

Remo Stars’ chance to double their lead four minutes later was denied as Rangers’ defenders were clinically in clearing the ball away from their box as the game ended 1:0 after 45 minutes of intense actions.

The sky blue stars started the second half with their brilliant first half performance, pressuring the opposition’s half with multiple counterattacks but the visitors’ goalkeeper was brilliant in stopping another goal from finding the back of the net

The host pressure continues until the 95th-minute when Rangers’ effort of restoring the disparity was denied as Kayode Bankole produced a brilliant save to secure the maximum three points for Remo Stars.

The game ended one nil in favour of the home team at the Remo Stars Stadium in Ikenne.

The victory sent Gbenga Ogunbote’s men to third on the NPFL table with 46 points while the Flying Antelopes dropped to fourth with 45 points.

Rangers’ defeat was their first this season in the southwest where they have earned three points against three different teams.

Elsewhere at the Ilorin Township Stadium, Kwara United were against Shooting Stars as they secure an important 3-1 win over the Oluyole Warriors to keep their hope for a continental slot alive.

The first attempt on goal by the host was Alao Danbani’s right footed shot that went wide in the 24th minute.

Samad Kadiri finally broke the deadlock for Kwara United to put them ahead in the 38th minute with a shot that caught Goalkeeper Detan Ogundare unaware.

The goal gave the host a goal advantage going into the second half. The Afonja Warriors continued their first half dominance as the second half went underway, putting pressure on the opposition’s half.

Issa Gata doubled the lead for the host in the 60th minute from a through pass from Alao Danbani.

Shooting Stars had opportunity to reduce the deficits in the 64th minute but the cross by Malomo Taofeek was deflected to a corner.

Ayobami Junior finally dashed the visitors’ hope of restoring the disparity when he slotted in the third goal for the host four minutes later. The forward received a well crafted pass from Alao Danbani, who dribbled two Shooting Stars players to record his second assist of the game.

However, the Oluyole Warriors grabbed a consolation from an effort by Opeoluwa Olufemi in the fourth minute of added time.

The victory keeps Kwara United in the fifth position with 43 points while Shooting Stars still stays 11th on the league table with 37 points.