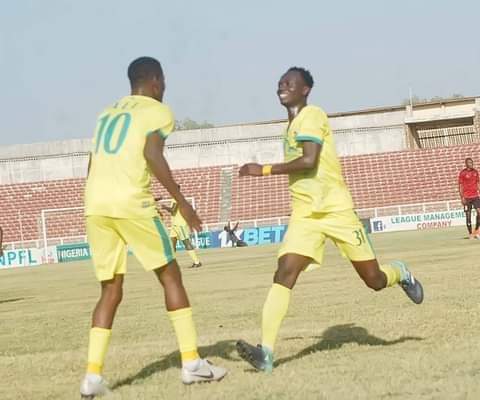 Kano Pillars FC continued their impressive start to the 2020/21 Nigeria Professional Football League season after beating former champions, Plateau Utd FC, by a lone goal courtesy of club captain and talisman, Rabiu Ali aka Pele as he is fondly called by his fans.

The game was heading to a 0-0 stalemate until Plateau Utd defender, Dennis Nya brought down Abbas Rabiu inside the 18-yard box on the 77th minute and the referee awarded a spot kick to the home side.

Rabiu Ali stepped in to convert the resulting spot kick for his 3rd goal of the season and the 90th in the history of the Nigeria Professional Football League.

After the encounter, technical adviser of Kano Pillars, Mr. Emmanuel Lionel Soccoia was over the moon and has described the match as a high contest affair. The French tactician commended his soldiers for their commitment and fighting spirit in the course of the game.

He said, despite the fatigue worrying his players after playing on Sunday against Nasarawa Utd and the trip by the road from Lafia to Kaduna, his players still gave in their best against a highly disciplined Plateau Utd.

The former FC Leopard of South Africa gaffer is full of optimism ahead of the Sai Masu Gida’s next game away to Enyimba Int’l of Aba on Sunday. He said, if his player can continued playing like in their previous NPFL matches, they would be up for something big against the People’s Elephant in the Match Day 5 of the ongoing 2020/21 Nigeria Professional Football League season.

“It is very vital to win at home and followed it up with an away point(s),” Mr. Lionel said.

Dutch into Nations League semis after 2-2 draw with Germany

Expectations From Premier League Clubs as New Season Kicks Off