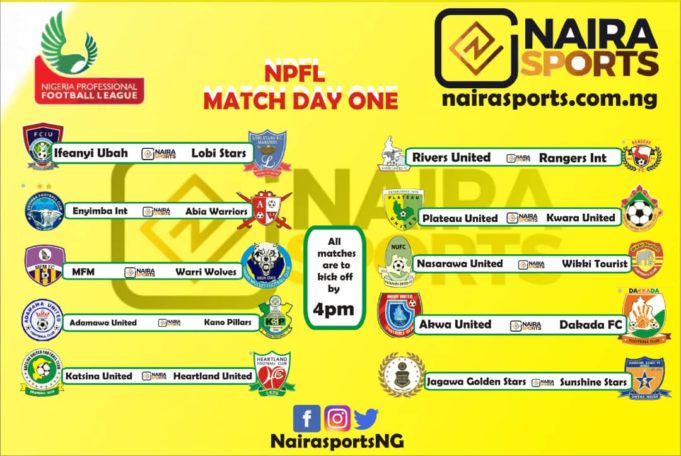 Over 280 days without the Nigeria Professional Football League (NPFL), the elite football league in the country returns with two derbies as matchday one kick off on Sunday across ten centres.

The 2019/2020  Ended abruptly on match day 25 in March when NFF suspended all football activities in the country due to COVID 19.

No doubt this encounter will be one of the most entertained fixture of the opening day,  The pride of Rivers will host Rangers days after defeating Bloemfontein Celtic of south Africa 2-0 away from home in CAF Confederation Cup play-off round.

Rangers will be heading to port harcourt with the 2-0 victory over Rivers United at the final of 2020 Ifeanyi Ekwueme Tico Select pre-season tourney.

Kano Pillars will be coming from an exit in CAF Confederations Cup against ASC Jaraaf F.C of Senegal in the preliminary round.

Pillars lost 3-1 In the first leg and played goalless draw in Kaduna.

Plateau United will host Kwara United at the New Jos Stadium as one of the opening fixtures for match day one of NPFL 2020/2021 Season.

Abdu Maikaba tutored side are still reeling from their defeat in CAF champions league, plateau was eliminated by Simba SC of Tanzania in the CAF Champions League preliminary.

On the side, the Harmony boys have responded to the pressing need of bolstering their squad ahead of the new football season.

The Uyo derby is one of the biggest encounter on opening day fixtures of the NPFL as the two teams will lock horn against each other at the Nest of Champions Stadium, Uyo.

Akwa United might be one of the league contender as Mfon Udoh will team up Ndifreke Effiong upfront, Akwa United and Dakkada played 2-2 last season.

FC Ifeanyi Ubah giving opportunities to their youth players after suffering from financial crisis in the past three season.

The pride of Benue will start the new season with most of their regular last season.Chuwkuma Onuwa, Mustapha Aliko joined the team.

Both teams will go into the opening fixtures with a positive mindset to grab all the maximum points.

The giant-killers will be hoping to secure maximum points.

Jigawa might have relegated during 2019/2020 season but thanks to COVID19 which made the season to end abruptly.

NPFL Match day one is not complete without the  arch-rivals between Enyimba and Abia Warriors, this is one of the most decorated in the league.

Previous games between these two teams have witnessed a lot of firepower and fracas between the fans which resulted in the ferocious atmosphere.

Which team are you tipping victory for on matchday one?

Why I returned to NPFL, Ahmed Musa Reveals

NPFL 21: We will replicate what we did in south Africa...