Match day Five of the Nigeria National League (NNL) will see Ogun state based sides battled against each other as Remo Stars host Gateway United at the Remo Stars Stadium, Ikenne-Remo.

The Sky Blue Stars will be entering the clash with away victory when they defeated Holy Arrows 1-0 at the Ole Township Stadium in Delta State while Rock city boys had . 2-0 victory against Apex Krane at the MKO Abiola Stadium in Ogun state.

For Gateway United they have managed to pick a point from Maximum six points on the road this season, with a loss in Lagos against joy comet 3-0 and a goalless draw against J Atete.

The most recent time Remo Stars and Gateway United met in a competitive competition was in 2018 and 2019 respectively when the young stars defeated Gateway United on penalties in the State FA Cup after their former player Ogunribide Oluwaseun scored to cancel out Nduka Junior’s goal.

In 2019, Gateway United FC defeated the U19s 3-0 in the Ogun State FA Cup when Ikechukwu Julius, Michael Okolo, and Kola Odumbaku all scored to give them a slot in the finals of that year’s FA Cup.

The important aspect of this fixture is that Daniel Ogunmodede was in charge of the U19s when they defeated Gateway United FC, also Nduka Junior was part of the team that defeated them at the Gateway Stadium in Ilaro that year.

Also, Ogunribide Oluwaseun whose goal cancelled that of Nduka Junior before the spot-kick had switched allegiance to the Sky Blue Stars and might be part of the squad to face Gateway United on Sunday.

Ahead of the encounter, Remo Stars Football Club Head Coach, Daniel Ogunmodede has said he is very optimistic that his wards will grind out the maximum points against local rivals.

“We will go into that game not as local rivals but as a normal game in the NNL because our approach will still be the way we approached previous home games.”

“Gateway United is a state team, they’ve been in existence for a very long time, they are a household name but this is football, we will go into the game with our normal confidence. Our style of play won’t change for no reason. We are so optimistic that we will get the same results we have been getting in our home matches which is the maximum three points.”

“For now, I am still expecting some advice from the medical team because we have some of our boys who are already injured but, we registered 25 players, five from the U19s and it’s the reason we have over 18 players to execute the game. We are very much ready for a time like this, it is expected, but I am very sure we will overcome.” he said

On his part, Gateway United Head Coach,Hakeem Busari assured that his side will make the trip count

“There wouldn’t have been a better time to face Daniel Ogunmodede’s side than now when the team is refreshed after a week of uninterrupted preparation. The morale is good to face them after a 2-nil win over Apex Krane last week Saturday. Our resolve is to pick points home and away regardless of the ground. We have seen a handful of away wins and that’s a pointer that there it’s no longer business as usual”

“It’s like two brothers at war, a healthy war so to speak. It will definitely be an interesting match because we playing a very good team. They haven’t looked back after 4-nil loss to Bayelsa United, just as we also put the opening defeat behind us. I’m not the type that boasts. I always want results to speak for me. All I know is it will be a good watch, a spectacle” he concluded. 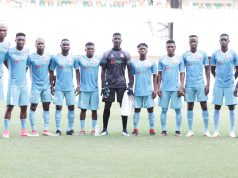 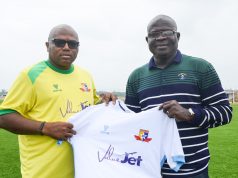