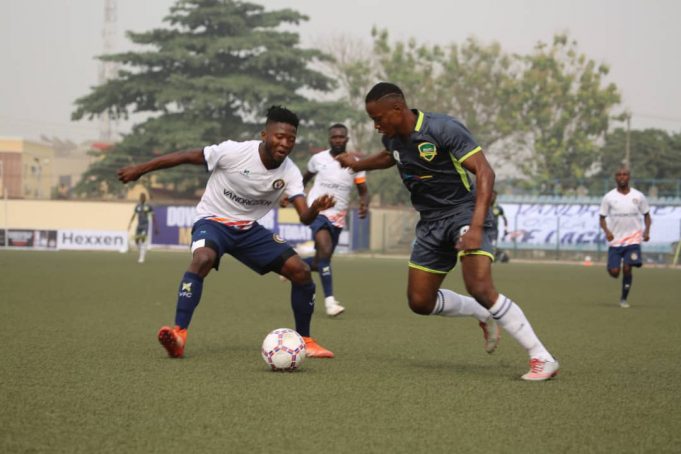 A missed penalty and a very profligate display in the attack gifted hosts Vandrezzer FC all three points in a match day two Nigeria National League fixture at the expense of very coordinated and compact visiting FC Nilayo at the Agege Township Stadium, Lagos.

The game had barely kicked off when the referee awarded a penalty to Vandrezzer, goalkeeper Ikenna Benjamin was penalized for gathering a ball in his area, the referee initially awarded a goal kick but the assistant referee signalled for a penalty, a decision that was contested by the visiting players.

Stand in Captain for Vandrezzer Christopher Lolo stepped up in the fifth minute and converted the spot kick, beating goalkeeper Ikenna Benjamin from six yards.

Kabiru Popoola stepped up in the 12th minute and his spot kick was denied by the woodwork, the Vandrezzer defence cleared the ball thereafter and averted the danger completely.

While Vandrezzer were unable to create clear cut chances, FC Nilayo’s creativity led to several chances to equalize but the attackers did everything right except putting the ball in the back of the net.

James Ekwebuike was extremely profligate, while the upright denied a beautiful Muri Batuli’s attempt from way out.

While it looked like FC Nilayo will get back into the game, the terrific and electrifying display did not yield any result with James Ekwebuike and Kabiru Osoba who had a chance to steal a point in the dying moment of the game the biggest culprits. 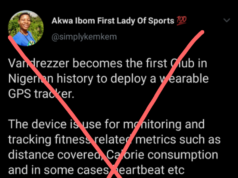 FACT CHECK: Is Vandrezzer the First Club to Use GPS tracker in Nigeria?

Serena Williams out of Australian Open