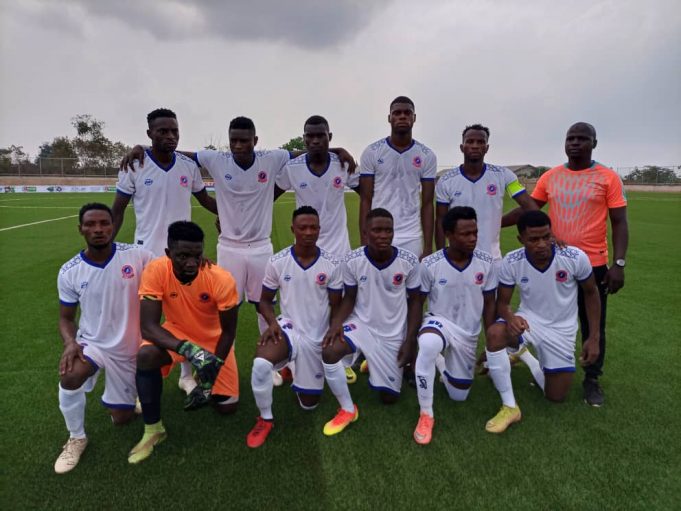 A superb flick into the top corner of goal with the head by Seun Adepoju in the 58th minute, was all Magate FC needed to draw 1️⃣-1️⃣ with log leaders Destiny Boys in a sixth game of the Nationwide League One (NLO) season played at the Remo Stars Stadium in Ikenne, Ogun State.

The Coach Farouk side who finished the game with 10-man received a blow below the belt as the team lost it’s ‘Captain Fantastic’ Adeniyi Aliu in the 25th minute to injury after he had a cut below his left eye as he was elbowed by Destiny Boys defender during the run of play.

The Magate bench, were left in awe as the offender walked away without been cautioned, as neither the centre referee nor his first assistant saw the infringement.

Less than five minutes after Aliu was replaced, Destiny Boys scored the first goal of the game via Qosim Abdulrahim.

Magate had the chance to level scores in the 36th minute but Philips effort on goal hit the side netting for a goal kick to Destiny FC.

The away side went into the break with their one goal lead even as the Coach Farouk side pressed for an equalising goal.

The second 45 minutes was a soaked tensed as Magate scored an equalizing goal and ended the game with a player out.

Seun Adepoju was a torn in the flesh of Destiny Boys defenders with his pace. His effort was rewarded in the 53rd minute as he nodded a cross from Philips assist into the net to make scores even.

Magate were hard done in the 76th minute after it’s centre-back Oluwaseun Babatunde was shown his marching orders after scooping up a second yellow card.

The Coach Farouk side did show character and kept their focus after the unfortunate incident, as they kept Destiny Boys defenders at bay, defending well till the blast of full time.

Magate FC now has 8 points from six games while Destiny Boys kept their number one spot on the log after it garnered 17 points from seven games.