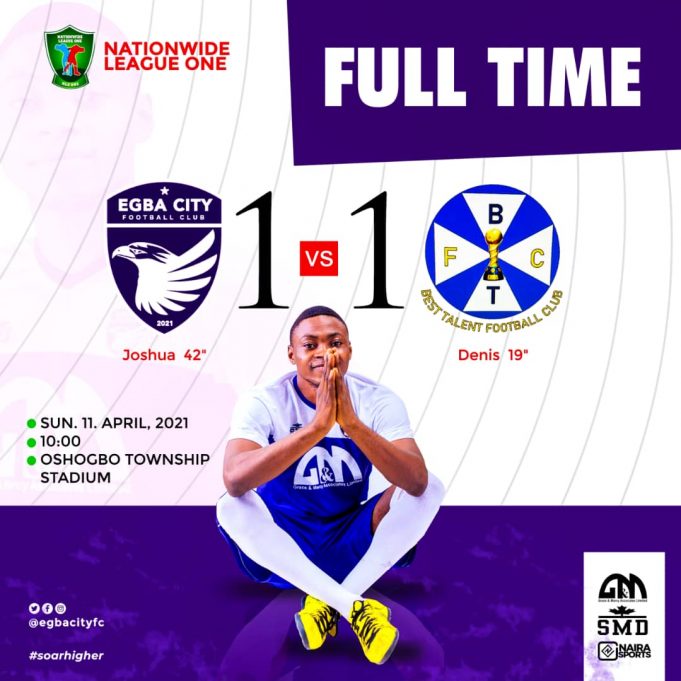 The match live up to expectations with the hawks dictating the pace of the game.

Oluwaferanmi Adebola came close in the 10th minute with an effort cleared off for a corner by Best Talent goalkeeper.

Best Talent takes the lead in the 17th minutes through Dennis Baba.

Three minutes into the half time break, Maduabuchi Joshua levelled the scoreline in a perfect finish for Egba City.

The Hawks continue with the pressure in the third but it was Best Talent who resolutely defended their goal to avoid further damage.

Reacting after the Game, Head Coach, Oviawe Henry Eniola told Egba city Football Club Media that he his happy with the results that his boys will work on the mistakes

He added that the fans should be expecting Victory from the boys in the next game.

In his words, “I feel very elated considering the fact that this is our first competitive games. However, it’s a game we should have won convincingly but all the mistakes shall be corrected before the next game.

“The fans should not expect anything less from the team except victory in our next game. Thanks so much” he said

Egba city will be battling Barrier fc by 2pm on matchday two at the Osogbo township stadium.