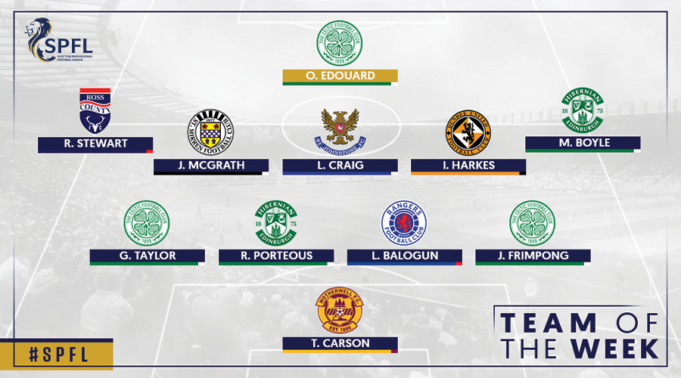 Super Eagles defender, Leon Balogun has made Scottish Professional Football League, SPFL team of the of week of 2020/21 season.

Balogun shew he is ready to suit with Scottish game style and especially that of English coach Steven Gerrard. Rangers played their first game of the season against Aberdeen and the Nigerian has impressed observers.

GK – Trevor Carson (Motherwell)
There weren’t any goalkeepers in particularly brilliant form over the weekend, so we’ve gone for the best individual save. Carson’s denial of Ross Stewart was a stunning reaction stop and is sure to endure as a save-of-the-season contender from now until week 38. Plus, there’s no shame in the Northern Irishman only being beaten by a penalty on his long-awaited return.

DR – Jeremie Frimpong (Celtic)
The full-back scored and was a consistent and electric threat down the right flank as Celtic stuck five goals past Hamilton Accies on Sunday.

DC – Leon Balogun (Rangers)
A very impressive start from the summer signing saw him dominate opposing attackers in Rangers’ 1-0 victory over Aberdeen as the two clubs got the Scottish Premiership season under way.

DC – Ryan Porteous (Hibernian)
The defender played his first game since January and continually popped up in the right place to repel Kilmarnock attacks as Hibs got their season off to a strong start with a 2-1 triumph.

DL – Greg Taylor (Celtic)
Two assists from the left-back contributed to Celtic’s attacking showcase against Accies as the Scottish Premiership champions picked up where they left off last season.

MR – Martin Boyle (Hibernian)
Boyle’s star continues to rise after the Aberdonian Australian international netted both goals in the 2-1 victory over Kilmarnock, highlighting both his blistering pace and composure in front of goal to earn Jack Ross’ side all three points.

MC – Ian Harkes (Dundee United)
The midfielder’s surging runs were a huge factor in Dundee United’s impressive first-half display against St Johnstone. He didn’t have it quite his own way in the second period, but still showed an impressive ability to cut through the lines in the 1-1 draw.

MC – Liam Craig (St Johnstone)
Craig scored an excellent first-time volley to earn 10-man St Johnstone a point at Tannadice, but even without the goal the veteran midfielder excelled in the centre of the park as Callum Davidson’s side fought back.

MC – Jamie McGrath (St Mirren)
The January signing was the best player on the park and notched an assist with a perfectly-placed cross for Richard Tait, as St Mirren opened their campaign with a 1-0 win over Livingston.

ML – Ross Stewart (Ross County)
Stewart was a nightmare for Motherwell to handle in the first half, when he tucked away a penalty to net the game’s only goal, before he put in a tremendous shift defensively in the second period to help secure victory.

FC – Odsonne Edouard (Celtic)
Start as you mean to continue. The French striker was in scintillating form for the Hoops, netting a hat-trick and being a constant menace to the Accies defence in the 5-1 win. Not surprisingly, he is this week’s star man.